Normally, Daniel and I are quite the Halloweiners. We are all talk, no walk. We spend the entire months of September and October talking about amazing costumes we want to make, knowing full well neither of us is going to spend 239847 hours and $3892749287 making the extravagant and over the top ideas we come up with.

For example, last year we gabbed up the idea of a Headless Horseman costume.  We decided that Daniel would be the Headless Horseman and that he would carry June around, who would be wearing all black, except for her head so that it would be like Daniel was carrying his head around. Funny, right? Too bad they don't give out awards for the best Halloween ideas. We would win that. Instead, we wait until . . .  October 31st at 4:00 p.m. and scour our closet for what we already own.

Which usually results in Daniel dressing like Nacho Libre (Yes, we have the stuff for that on hand. Yes, we are that cool) and me dressing up like a cowgirl or a celebrity. Not impressive.

This year, we turned into Hallowinners!  One of Daniel's co-workers gave us an outfit for June that we didn't quite know what to do with. It's a jumpsuit that says "Penn State" on it. It's also for 6-9 month olds. Luckily, June is small so it basically fit her.  With the help from some neighbors who own cooler kid clothes than we do, we came up with: 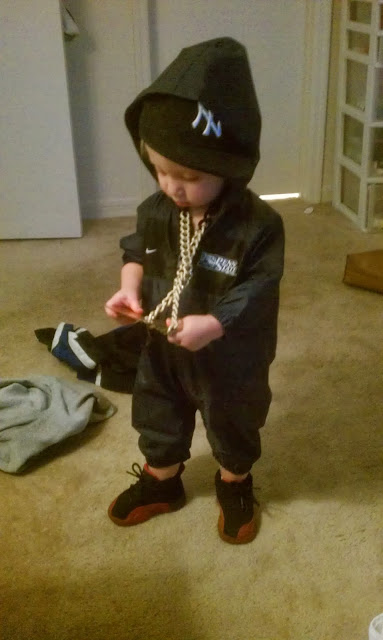 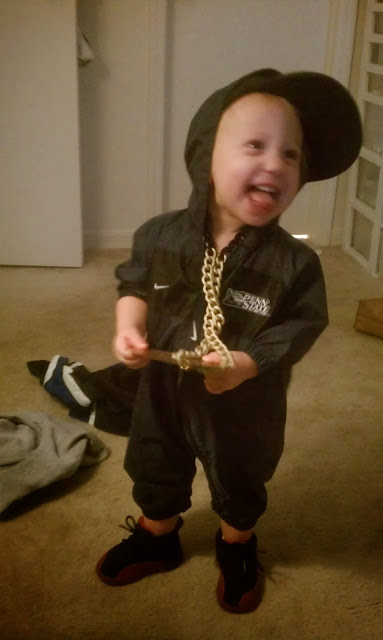 J-Dizzle the Rapper! Or J-Dawgs (tribute to BYU)! Or J-Money! We couldn't decide. You may now vote in the comments! And all several days before Halloween! We brainstormed, we planned, we executed!

Daniel and I dressed up as her security detail: 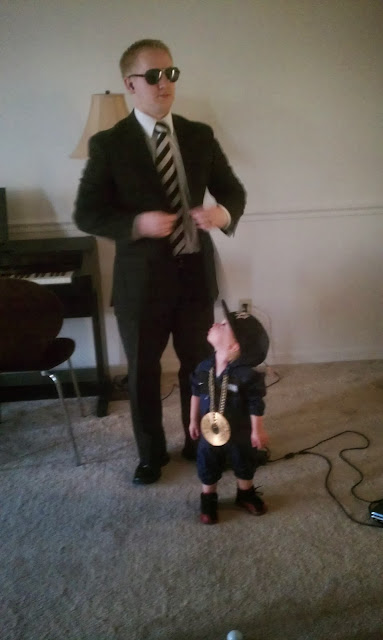 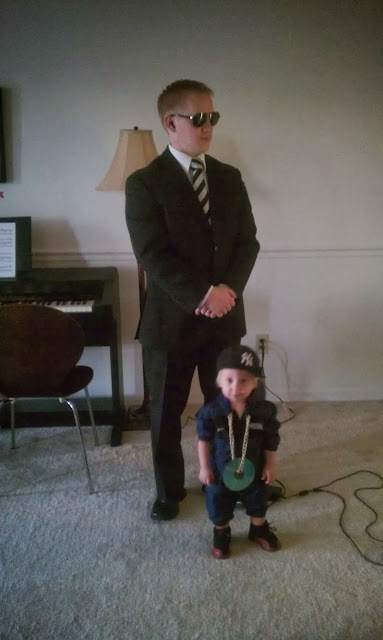 Which, yes, means that, once again, Daniel and I just scoured out closets again for ourselves this year. Baby steps, people.

Of course, I forgot to take a pic of myself, but I was also security. Just more feminine. Speaking of which, doesn't June look like such a boy in her costume? It was startling. Reference point: 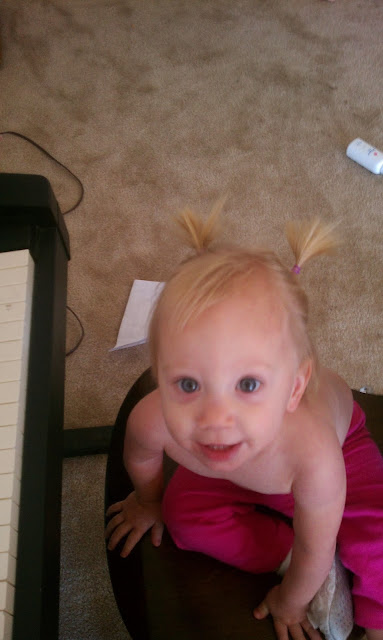 June won the Best Costume award at the party we went to Saturday night! Hallowinners! 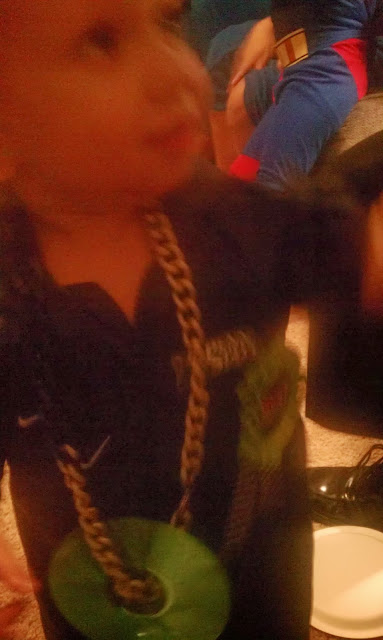 And it feels so good.

As you may remember, I recently had some work done on my ear. It healed beautifully, and all seemed to be well. The plastic surgeon who stitched it up told me to wait 90 days before re-piercing and to make sure that the new piercing didn't overlap with the old one. In fact, the new piercing had to be above the old piercing.

When I went to get my ear pierced, the girl at Icing (I'm so the coolest girl in my middle school!) told me that she was going to re-pierce both ears because the higher re-piercing on my deformed ear (or DE) would be uneven with the piercing on my Non-Deformed Ear (or NDE).

I was excited to have my ears re-pierced because earrings are the only piece of jewelry I consistently wear. I am a dangly earring girl. I feel like that's all I need.  Especially since I am also a huge pony tail wearer. A pony tail by itself is me being lazy, but paired with earrings??  That practically changes the ponytail to an updo.  One of those fancy updos from the 90s. With lots of ringlets and tendrils.

Anyway, I was also excited to re-pierce because my brother's wedding was coming up and my sister had bought us complimentary, but non-matching, earrings to wear.  Fun!

I was only about four weeks into my new piercings, but figured I would be able to switch out the earrings for one day, the big wedding.

The morning of the day we were flying to Utah from Florida (read: a huge, long trip), I woke up and started to get ready as normal. I knew the day was going to be packed and crazy with trying to pack and not forget anything crazy. As I brushed my hair, I noticed that the earring on my DE was gone. 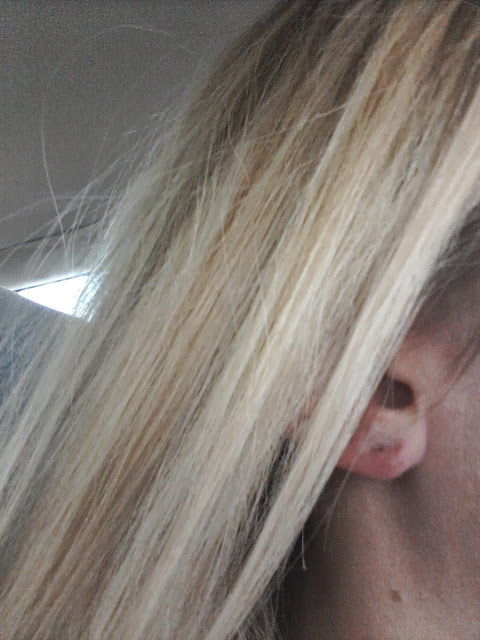 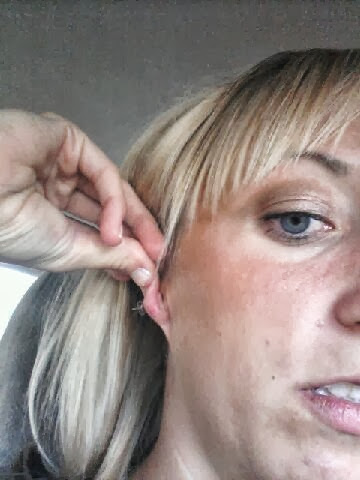 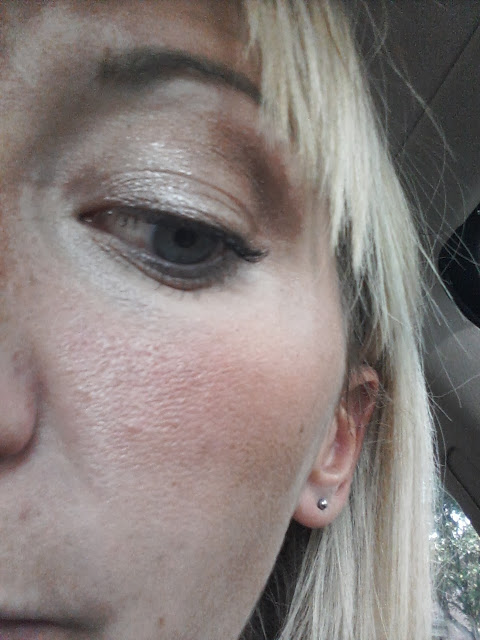 Freaky, right?  And not exactly the kind of thing you want to deal with on a day you are leaving town!!

So I high-tailed it to the doc. The nurse who took my vitals kept staring at my ear, then told me the exact same thing had happened to her mother and she had to have MAJOR SURGERY.  She obviously passed Bedside Manner 101.

My doc told me he had never seen anything like it before and had no idea what to do.  He said that he wanted me to try to take the clasp off the back of the post and to do so without touching the front of my ear. I tugged on the clasp as neatly as I could, and the WHOLE EARRING came out of the back of my ear.

He cleaned it out and sent me on my way, but not before telling me that I shouldn't pierce my ears anymore.  I am still so sad about this!

So for now, I am sporting some clip-ons from Linz's grandmother. Thanks, Marie! 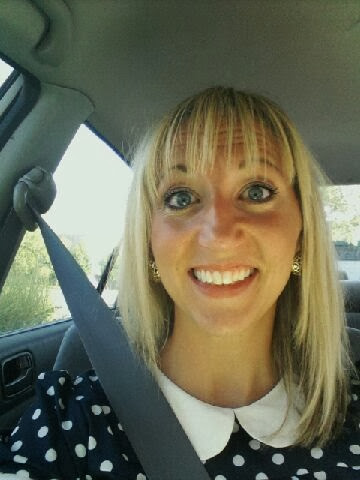 Oh, and I cut bangs. Does anyone have any thoughts on my ear? Have you heard of this happening to anyone before? Did they ever to pierce again?

In other medical news, June burned her hand on my flat iron. Luckily, she had an appointment already that day to get some immunizations. We should probably just have a standing appointment with the doc everyday with the crazy happenings around here.

Here June is patiently waiting at the doc's office with her hand in ice: 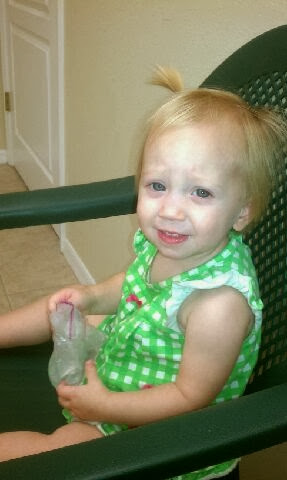 She never would let me get a good pic of her burned thumb, but it wasn't pretty.

Also, I have started swimming in the Adult Masters class at the YMCA. That will be a whole different post, but June has taken to wearing my swim goggles whenever she can.

At the library during story time: 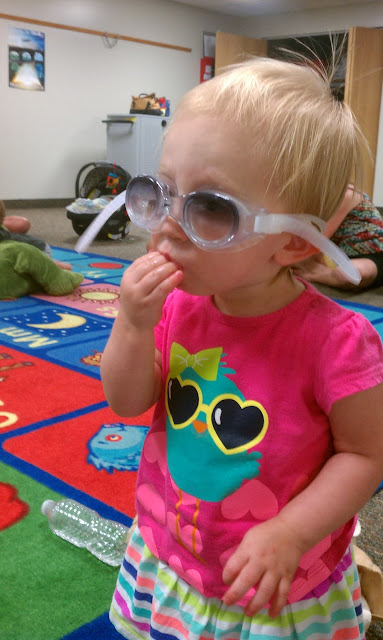 At home, with her full diaper falling out of her shorts: 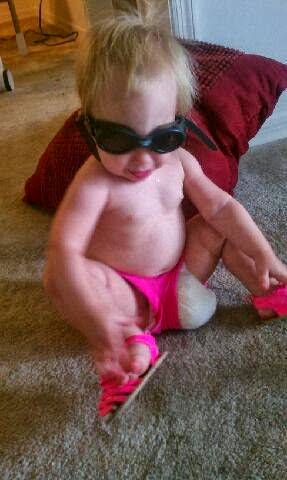 1.  Reading in her old car seat she is now way too big for: 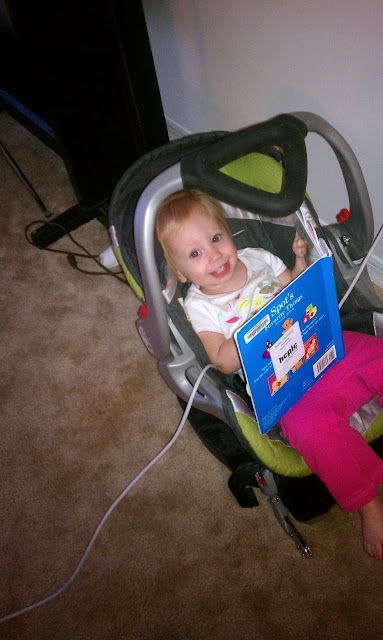 2.  Her Daddy.  Daniel is officially the "Favorite Parent." June cries when he leaves for work or church meetings. She pushes me away whenever he is around. And all of this because he is "fun." Sure, he will throw her up in the air more than twice, (my all-time limit) and will read the same story to her 298374 times in all of the funny voices and will let her eat whatever she wants, but does that really make him more fun than me? 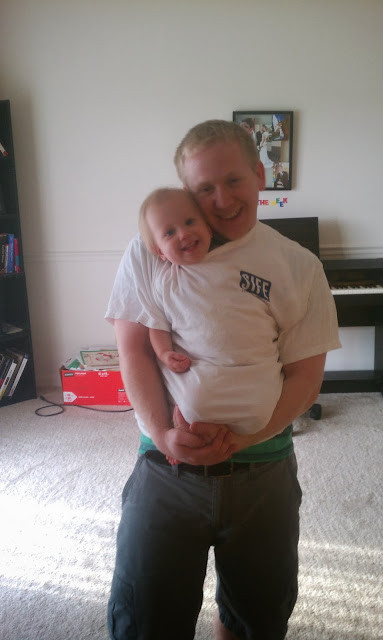 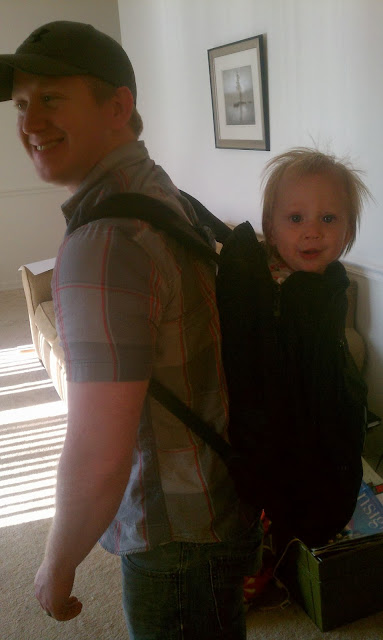 I mean, honestly, Daniel is always going to win. The other day, I asked him to bring me some ice cream. He scooped me two different kinds (both variations on chocolate) and crushed some Milky Way bars into them. I just can't compete with that sort of ingenuity. Or kindness. 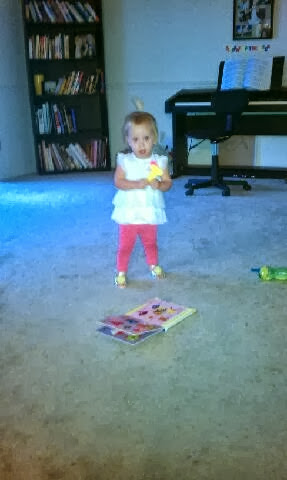