We Do Stuff Sometimes

Every once in awhile, we surprise ourselves and do something fun. Here are those somethings:

1. Animal Kingdom Lodge. We have some friends who fly here from Vegas once a year to go to Disney. They live it up by staying in a cool Disney resort lodge and buying tickets to special Disney events (trick or treating with the characters, for example) and let us mooches come by and eat their food and stay at their hotel. It's a pretty sweet deal. I can see why they are dying to be our friends. This year, they saved up their timeshare points to stay at the Animal Kingdom Lodge. This guy was mere feet from our balcony! 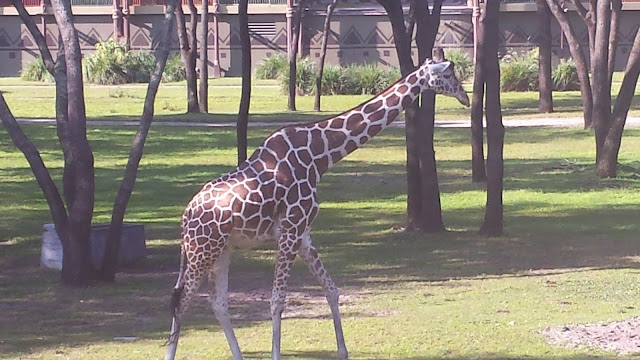 We were also able to go to the temple and hit up a restaurant we've been wanting to try, Tom and Chee. For those of you who watch Shark Tank, you know that this is a gourmet grilled cheese place that Barbara Corcoran invested in. 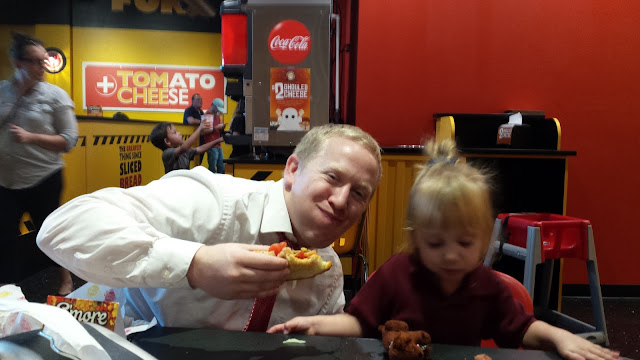 Verdict says? Meh. It was totally fine. And that's it. Not great, not bad. Fast service, GREAT service even, but the food was nothing amazing.

Except, we did indulge in this: 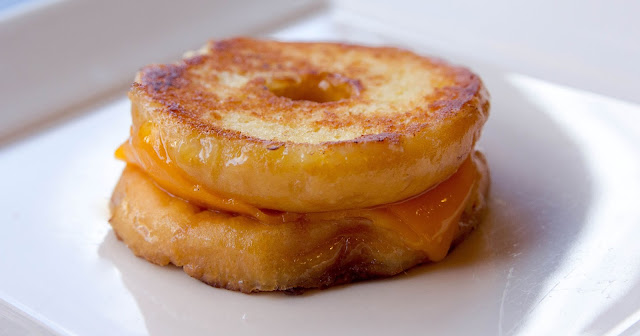 That, my friends, is the grilled cheese doughnut. It was disgustingly delightful. Horribly awesome. As in, I loved it but probably fits best in the "eat once a decade" category in the food pyramid. Unfortunately my favorite category (hello deep fried snickers!).

They had a face painting artist there who was painting kids' faces with a purchase of an entree. 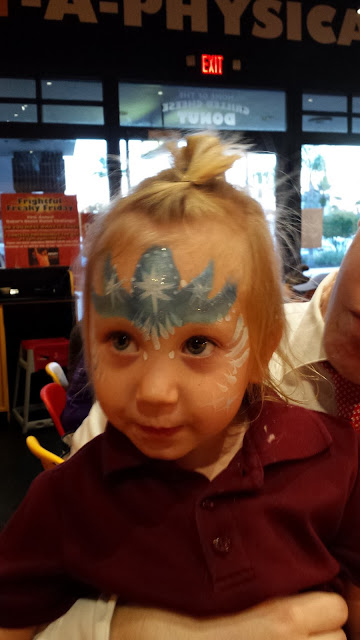 2. Busch Gardens. We will also made it to Busch Gardens this weekend. It's an unusually warm November here in Tampa (90 is the high almost every day), and we pretty much just sweated to death. But we were sweating and miserable together, which is what family is all about. 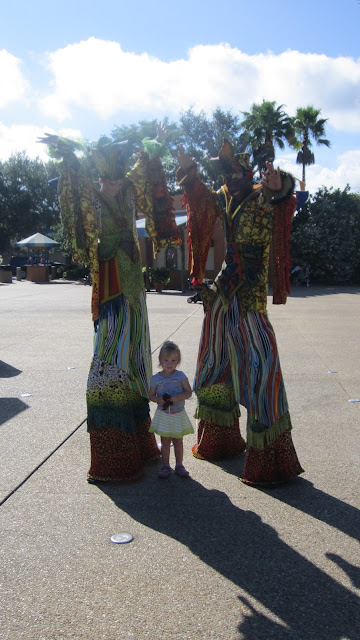 (You can always count on me for horrible pictures. I'm nothing if not consistent.) 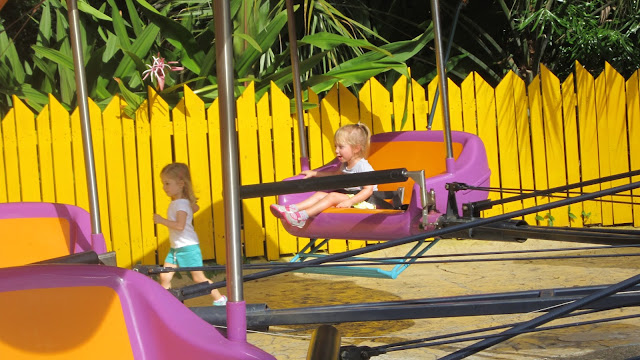 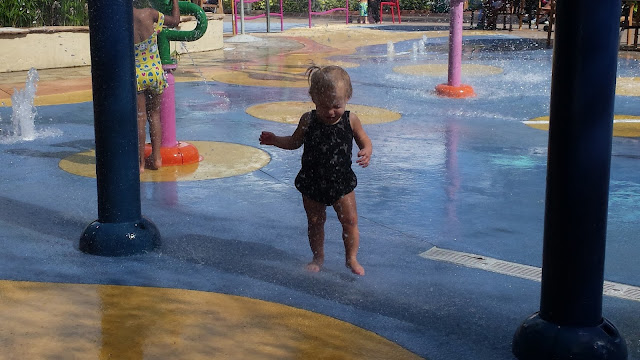 I think the best part was hanging at the splash pad where our kids were the only ones without swimsuits but were so happy to get some relief from the hot, hot sun.

3. And some miscellany: (Good thing I'm numbering as I go along. I'm sure you would just be lost without it.)

I posted about my ear issues a couple of times in the past (here and here). My mom came for a visit recently and treated me to getting my ears pierced again. And so far, so good! It's been six weeks and I've worn real earrings the past few days. My ears like some earrings more than others (I seem to have the most sensitive skin on the planet), but it's been fun! 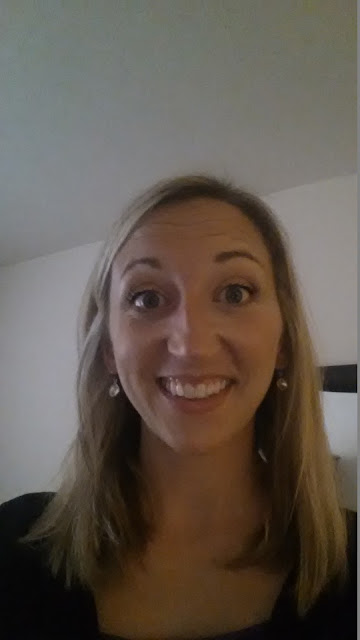 And now back to my family. (Nothing like the realization that you have posted about your ears THREE times and about your own husband only twice to make you realize your own shallowness.)

June is still going to school and has had a couple of really rough days, but mostly really good days! She is talking a lot more now and even tolerating Gwen's existence, much to our delight.

Nothing cuter than a 3 year old in a school uniform: 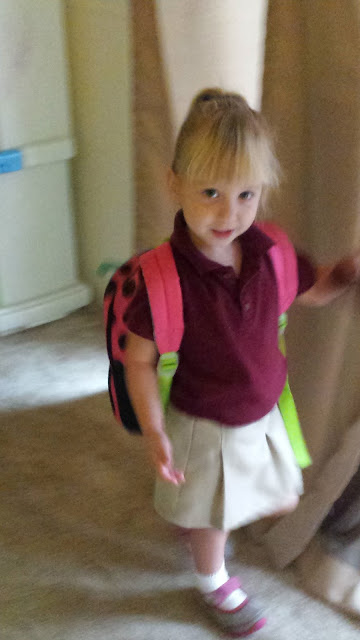 Her obsession with being a dog continues. I think we are going on about 6 weeks straight. Every time you call her by name, she quickly corrects you by saying, "I'm a dog!" Even when you are waking her up to go to school at 6:30 a.m. I will walk into her dark room and say, "June, time to go to school!" And she will quickly respond from underneath her blanket, "I'm a dog!" In order to keep the peace, we are learning to call her June Doggy.

Daniel made her especially happy one day when he taped a "tail" to her nightgown, which is now part of the routine: 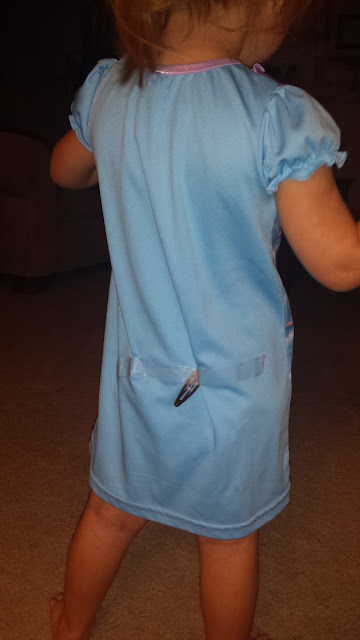 A small victory: wearing a headband! This is a victory I can't even claim in my own life. I think headbands hurt. But oh-so-cute. 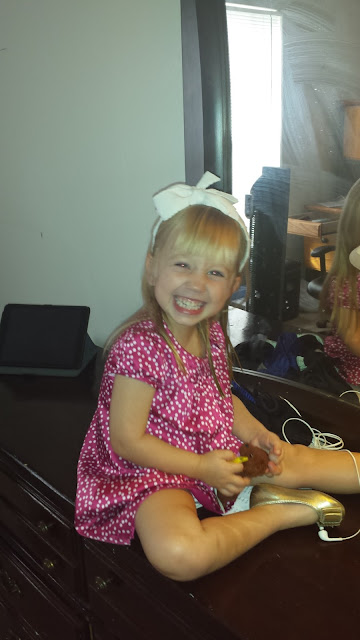 And one day when she was driving me especially batty with the dog routine, I found her school pictures in her backpack. Be still my ice cold heart! 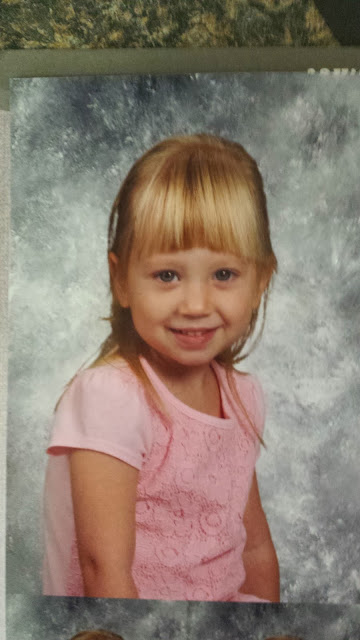 She has taken June's lead and has her blanket with her everywhere she goes. She's not a picky eater, which is great for my haphazard, throw a bunch of junk in a pan and top it with a dollop of cool whip kind of cooking. 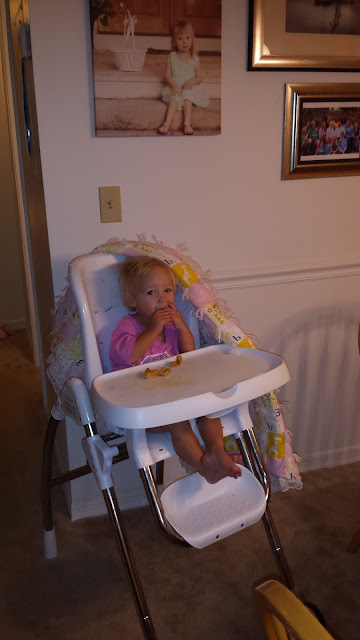 (This picture has sort of an ominous feel to me. The picture of June in the background seems to represent that Gwen will never be able to escape her sister's influence. Or something. I'm a younger sister too. I get it, Gwen!) 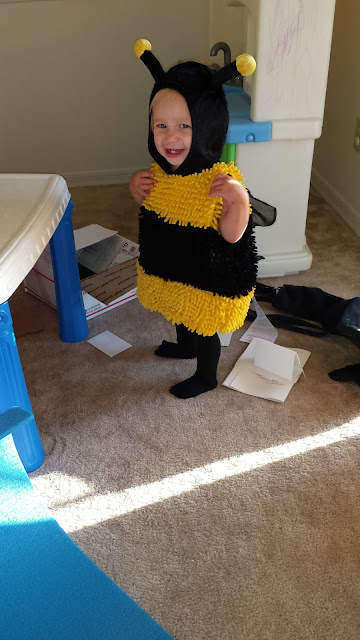 She loves to climb and to say "HI!" to everyone she says. She loves running away and pouring water all over herself and even the ipad when she's feeling especially adventurous. 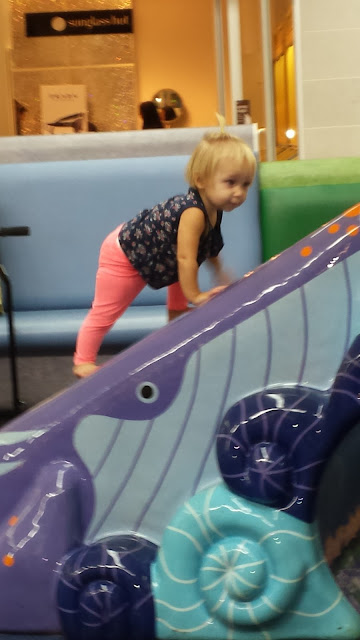 Of course, I have no pictures of my sweet husband. I've always thought our marriage is good, but lately it's even better. And that's due to him. He's the guy who works a lot and does church stuff a lot but takes it upon himself every night to be on kitchen clean-up duty. That's the secret to our happiness, I think. He's a champ. 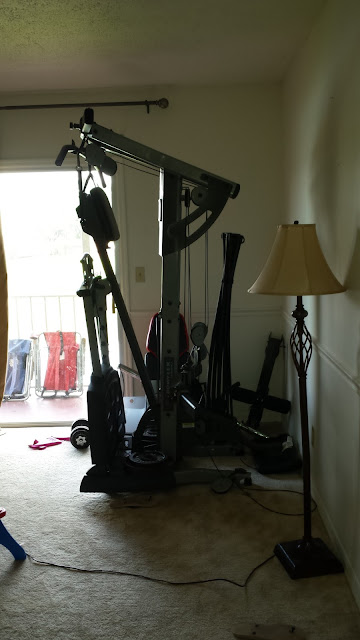 We bought this used Bowflex from Craigslist, and it's been awesome. It's definitely way bigger than we thought it would be, and so we weren't able to fit it into our bedroom as we had originally planned. So it's a striking yet subtle new focal point in our living room. Definitely adds a certain je-ne-sais-quoi to the decor.

I'm ending now. If you have made it this far in this extremely long post, you deserve something special. May I interest you in my latest dinner creation from tonight? It's topped with a dollop of cool whip.