It's amazing how the meaning of certain words change for you as you get older. For example, as a child the word "Christmas" invoked feelings of excitement. Christmas meant presents and treats. As an adult, Christmas means sometimes entirely different. Work. Exhaustion. Budget. The one good positive meaning Christmas has taken on in my adult years is that it's a much more spiritual experience than it was for me as a kid.

The phrase "car repair" has an extremely different effect on me now that I'm an adult. I don't think it had any effect on me as a kid, and now I cringe when I hear the words. In fact, I remember when I was getting ready to take my first car out to college, and it needed a repair before I could drive it from Missouri to Utah. Around the same time, my best friend Lindsey was also getting a car repair. We were shocked at the expense. We cried. And then we laughed. We made car repair jokes that we thought were so funny, I actually repeated them to my mechanic, who just stared at me. I remember telling him that I had car insurance and that I wanted to know what my co-pay was. And then I asked him how I could apply for Medi-car. Hardy har.

People don't get me.

Another word that has different meaning: Weekend. I lived for the weekend as a child, and I still love weekends. I love a lazy morning, but Dan studies all weekend, which means I'm flying solo. My attempts at a lazy weekend with my girls always fail. A day without structure gets really old around here by around 1 p.m. So three day weekends are kinda rough sometimes.

But we had a pretty successful one this go around.

We went to our beautiful park. One half of the park is open and has a little playground, and the other half has tall trees, picnic tables and tire swings. 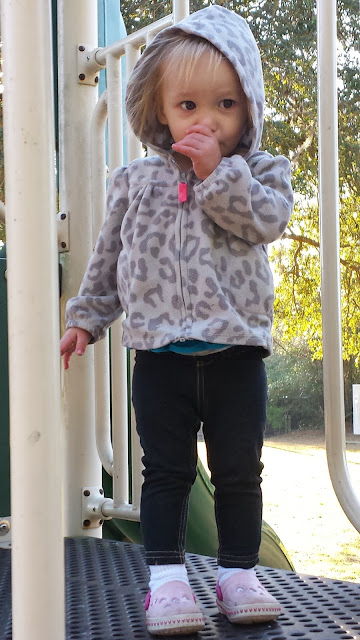 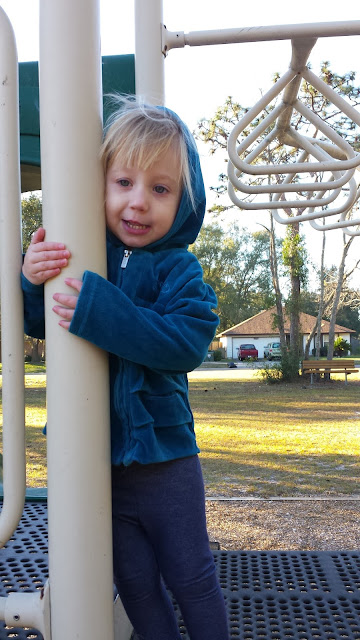 Dirty blue jacket and won't look at the camera? Check. 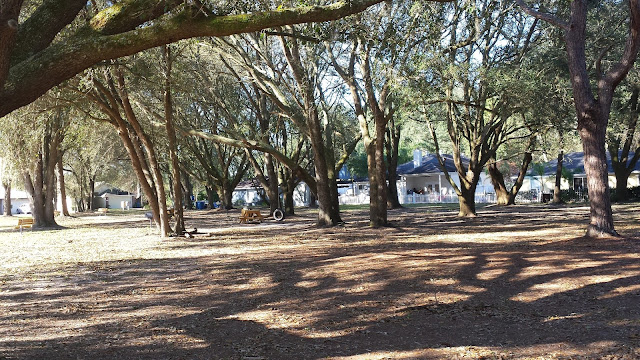 Every time I talk to someone from the western U.S., i.e. my husband, they consistently bring up how much they miss the mountains. Mountains are fine, but elevation makes me sick and my freshman year at BYU consisted of bloody noses from the dry air (once in front of my mega-crush at the time), so mountains aren't really my most flattering look. I. Love. Trees. They make Dan feel claustrophobic. He says that he feels like you could kill someone and throw it in the vegetation out here, and no one would ever find the body. Which is exactly what every wife wants to hear. Sweet Nothings. 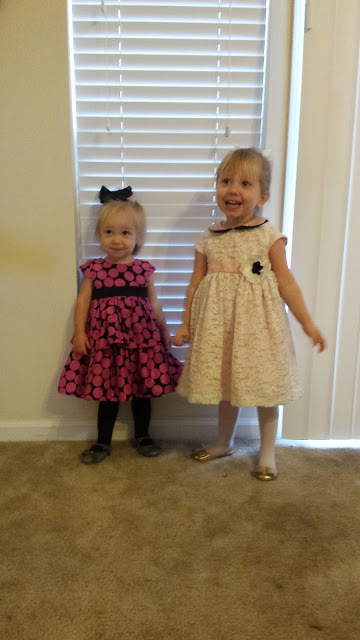 We went to church, and a lot of people were gone. We already have a tiny primary, but this past week there were only 4 junior primary kids. June is our ward's only Sunbeam. And you know what? I think she kind of loves it. I received my dream calling of primary pianist. Life. Is. Good. 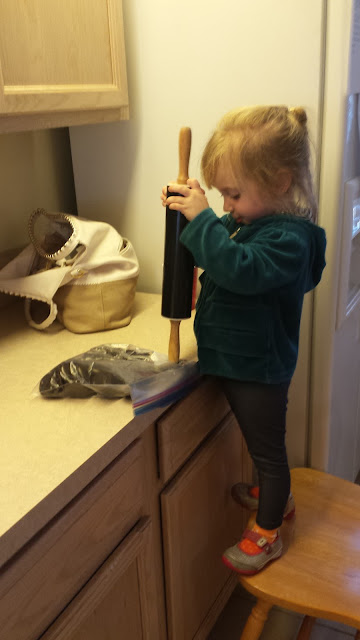 We made V-Day treats for our neighbors so that we could meet them. Having a 3-year old really comes in handy when you need to make something cute and you are not crafty because it gives you a great excuse for your unattractive offerings. These are supposed to look like Hershey kisses. 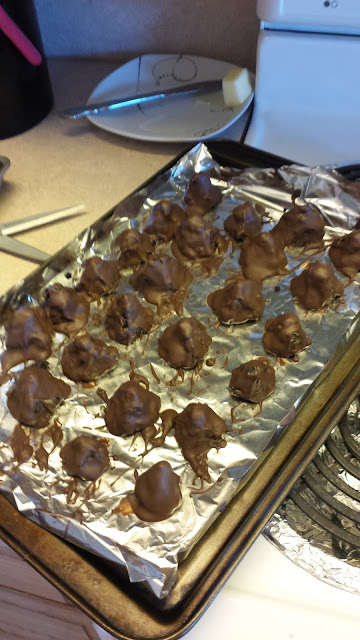 But instead look like the Sorting Hat from Harry Potter and Gloppy from Candy Land had a baby. 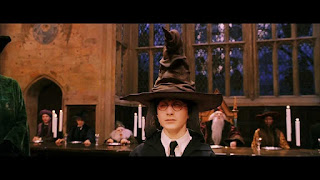 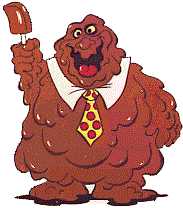 June had given up by the time I was dipping them, so the fault was really mine. But I made sure to mention to each neighbor that June had been my "big helper" with a wink so that they would conclude that was why the treats turned out so ugly.

Those treats were not my only V-Day fail. I tried making a delicious meal for my family, but everyone just kind of scooted their forks around the noodles and sauce until sufficient time had passed so that we could bring dessert out.

Which we did. And it was gross. Chocolate fondue sounds dreamy, but this was a nightmare. It was so dark, that even I, Resident Dark Chocolate Fan, couldn't choke it down.

But in the end, we had fun. Dan and I watched Little Women. We watch it every year, and every year we make the same comments, and there's something so comforting about that.

June and I make waffles together once a week and put them in the fridge for June's and Gwen's breakfasts. President's Day was the perfect day to make this week's batch. 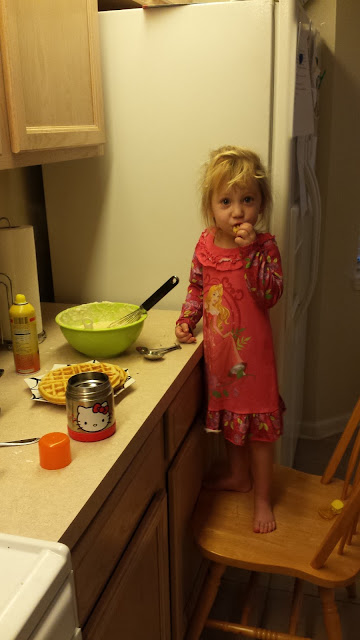 And then the girls had their hair cut. Apparently, everyone in the world had the same idea as I did to get haircuts that day. But June passed the time by demanding strangers read books to her. And they did. 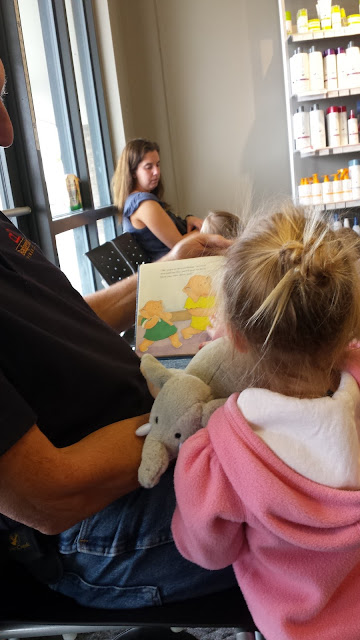 This was Gwen's first real haircut, and she actually liked it! Yay! 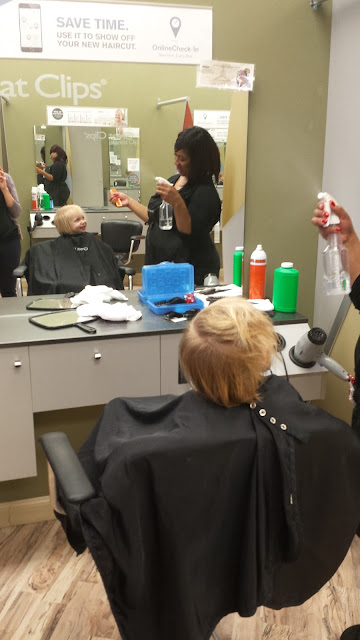 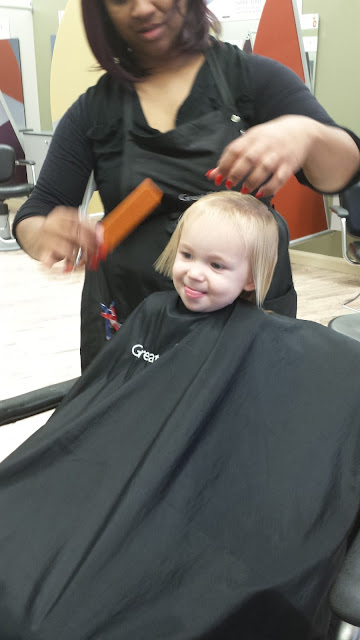 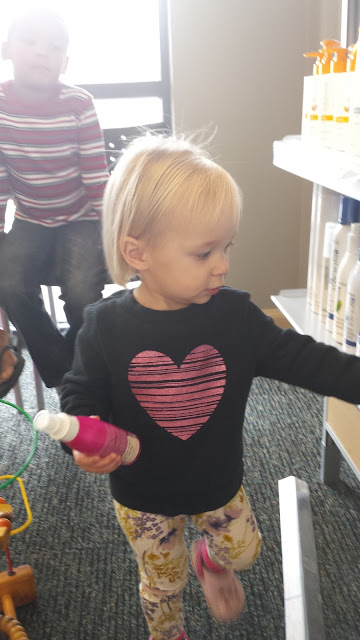 June was the harder haircut, but we survived. 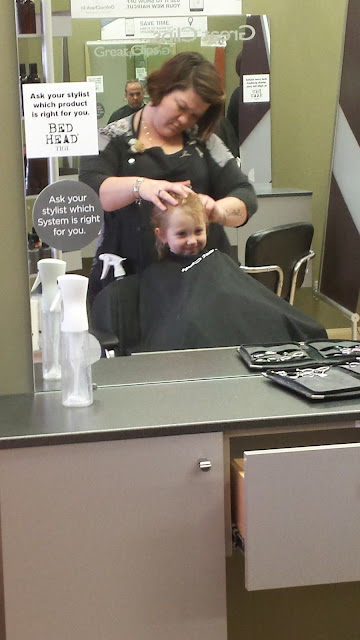 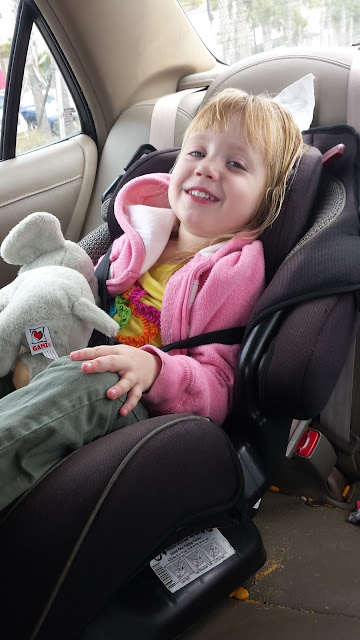 The gist of January for the Jolleys: Jacksonville.

The second week of January, Dan received a job offer which required relocation to Jacksonville. And would be starting in 3 weeks. We felt good about it (the next day) and decided to take it. The hiring manager told Dan that we could push the start date of the job back two weeks, but I figured 5 weeks of moving frenzy instead of 3 weeks is just two more weeks of living in transition and prolonging a painful process. Hence, we went with the three-week option and here we are, heads still spinning and mass confusion finally starting to simmer down to the normal state of confusion we more comfortably dwell in.

I knew nothing about Jacksonville before moving here, but am quickly starting to understand something my rental agent told me when I came out to look at houses. She said, "You are moving north of Tampa, but you are moving South culturally." Tampa is more touristy and tropical; Jacksonville is more forest-y and autumnal, and the people here are true southerners. Tampons (my word for Tampa residents) are great too, but more transient. I feel like the people I have met here have lived here for years and know everything about this town. It's really cool.

Moving was a heinous beast, as it always is. I always start out completely organized, and by the end I'm running on no sleep and just wishing I could burn everything down and start afresh in our new location. To prove the low level of function I have been exhibiting, a sad tale for you.

Upon arrival, I realized that one of our well-intentioned ward members in Tampa, while helping us load up our truck, had accidentally picked up a package addressed to one of our neighbors and put it with our belongings. I felt so bad that we had swiped it and promised to send it back to her. Which I did. I took it to the post office, and they showed me where it said "Fedex" on the box. So I again picked up the massively heavy box and, while pushing Gwen in a stroller, took it to the closest Fedex where they agreed to send it back to her. And then my sweet, former neighbor opened it and let me know it was a box that she had given me to help me move and it was full of my stuff. Yep. That's organization at its finest, folks.

My best friend Lindsey had tickets to visit us the weekend we moved, and we tried convincing her to change her tickets so that she could come during a more relaxed time. She wouldn't hear of it, insisting she wanted to help. She's one of those noble, good friends who wants to help you through a horrible situation, whereas I think I have ended entire friendships in order to get out of helping with a big project. She got in late the night before we moved 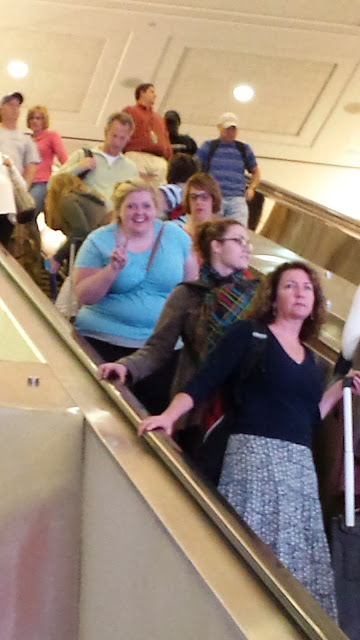 and then drove the moving truck early the next morning so that I could drive the kids, while Dan went to work his last day in Tampa and met up with us later. She is really, truly the best of best friends.

I'm down to unloading my last four boxes. I'm so excited. And whereas I usually have one or two boxes I never unload, I am determined to get through to the end. Tomorrow is the day!!

June started at a new school, where the teacher quickly determined "that girl has a mind of her own." 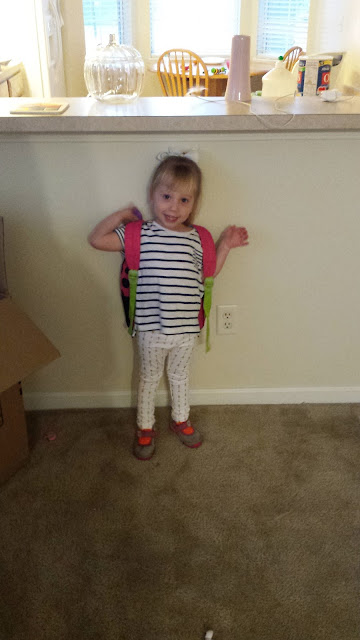 The best part of the new house, of course, is that it is a house! We have been living in apartments forever, and we finally get to stretch our legs a bit. We have been living here one week, and it's amazing how quickly you get used to comfort. I can't imagine going back to our old place now. 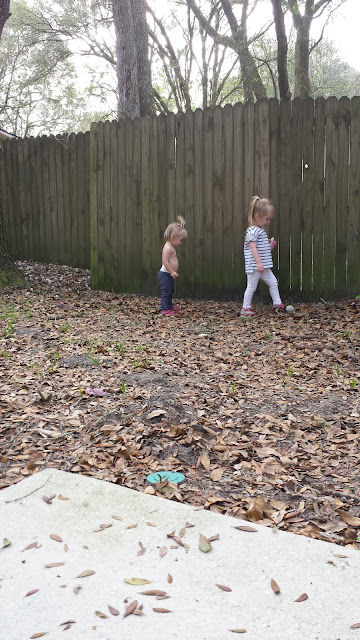 We have a backyard, which is very important for Gwen, my avid stick-collector. I found no fewer than 10 sticks under her crib when we packed it up in Tampa. 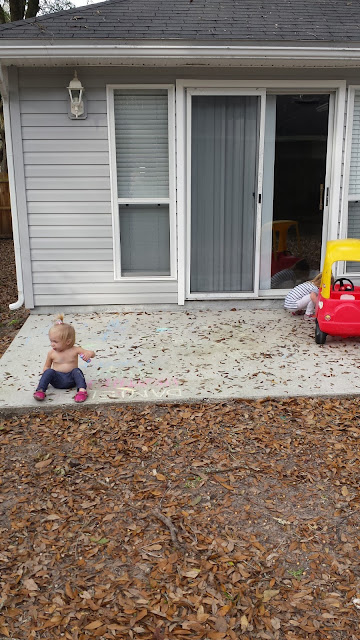 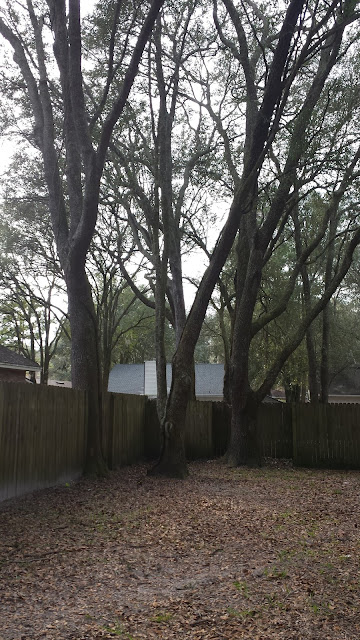 Plus, with a backyard, we have more places to facilitate time-out. 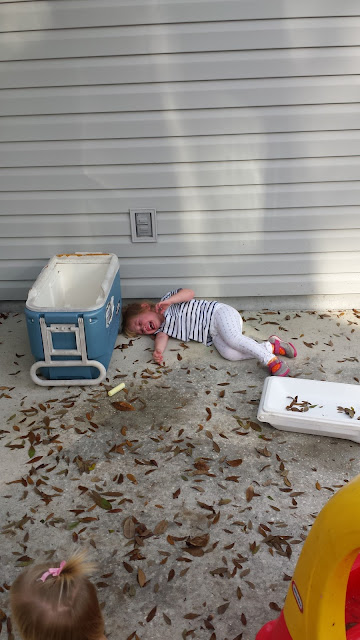 And just some other randoms while we're at it (because who knows when I'll blog again!) 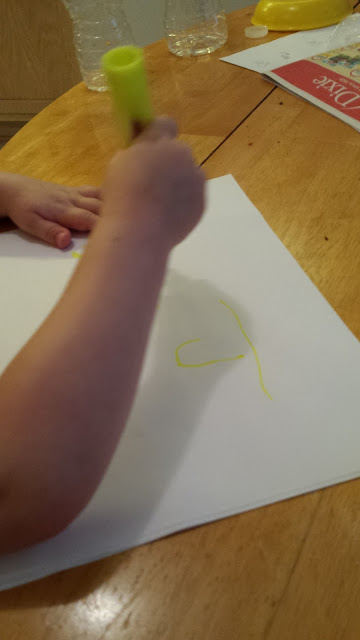 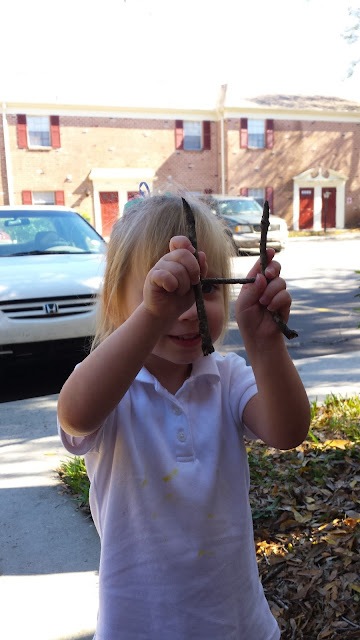 and makes the letter "H" out of sticks. 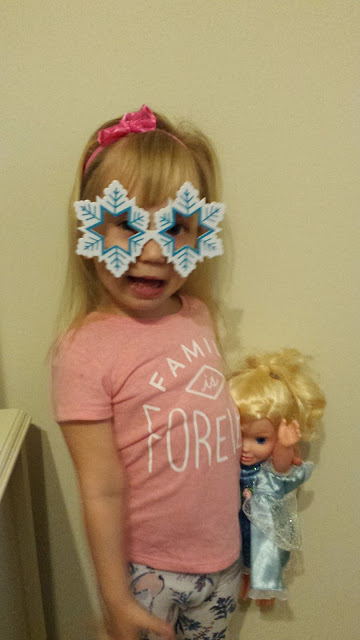 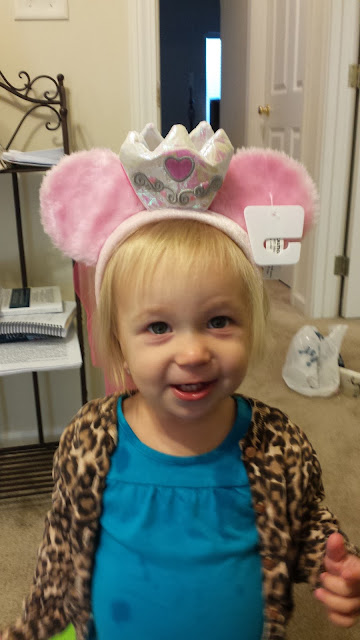 The Jolleys are in Jax.