Today we set out for June's weekly gymnastics class. Or perhaps I should say June's/Rudolph's/Fluffy the Dog/Huey the Hippo/Figaro the Cat's gymnastics class, thankyouverymuch. I helped June put her leotard on, braided her hair and pushed the girls into the garage to get into the car. The car was locked, and I turned around to go back into the house to get my keys. The door to the house was locked too. What? I still don't know how this happened. I don't know how I locked the door in the garage without my key. At this point, that feeling sank in. You know, the "locked out of the house" feeling. It's quite similar to the "dropped my phone in the toilet" feeling, yet not quite as severe as the "showed up to the airport without my wallet" feeling. I think some people call it "hopeless doom."

I ran to the front of the house. Locked. I ran to the side of the house and assessed the fence situation. Not open-able from the outside. I dragged a chair from the garage (that we realllly need to take back to the church at some point) and set it up outside the fence so I could jump over it. In a dress. The chair sank 4 inches into the ground under my weight (which just added to my overall awesome feeling), and there was just no way that was a viable option.

Dan has a temple recommend interview tonight, and he was planning on working late to finish a project and then go straight to the interview from work. I knew that he would come home at any point if I asked him to, but I didn't want to ask that. It's really hard for him to have an open evening to schedule an appointment as it is, and I knew he didn't have another open night for several weeks.

I wanted to ask a neighbor to come help me, but nobody was home. I even thought about asking one of the neighbors waaay down the street that I haven't met yet, but I didn't know how that would go over. "Hi, you haven't met me but I promise I live nearby. Will you help me break into my house?"

So I made a plan. First, I called the gymnastics center and told them June wouldn't be coming. I'm pretty sure her teacher is throwing a party for the next several days in honor of this occasion.

Then I decided that the girls and I would walk to the park. Where we would die.

A bit pessimistic perhaps, but it was HOT outside. I was sweating like crazy. I figured we could go to the park for an hour and then walk about a mile down the road to a Walgreens or Subway for dinner/drinks/bathroom. And then hopefully a neighbor would be home. I knew that there and back was a lot of walking for the girls, but it's all I knew to do.

We started on the trek for the park. I didn't mention to June that we weren't going to gymnastics anymore, and she didn't seem to notice. Sometimes her oblivion really pays off. 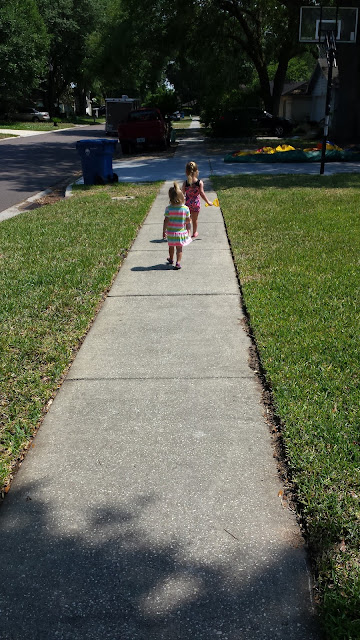 On our way, a man working on someone's lawn stopped me. "Are you Mrs. Johnson?" he asked. I told him no, I wasn't. He explained to me that he was doing a job for her but hadn't met her yet. I explained to him that we were on our way to the park because we were locked out of house. And then he told me he used to be a locksmith and had some tools in his truck. And so we went back to the house, and he started working.

He didn't have all of his tools and our lock was tricky, he told us. He had been working for about 20 minutes when I told him, "I know you have another job to do. Don't worry about this. We will figure something out."

And then he told me, "Honey, I have all the time in the world to help people."

Man alive. Tears sprang right to my eyes, but more importantly, those words stung my heart. Stung, I say, because I rush too much. Helping people can seem a nuisance to me.

It was about this time that he noticed that the hinges to the door were on the outside. "WHY DIDN'T I NOTICE THAT BEFORE?" he exclaimed. He ran to his truck, got out a few tools, and we were inside in 10 more minutes.

I feel like the Lord is really aware of my little family. We are pretty much a huge mess and rather consistently contentious and disorganized and whiny, but the Lord helps us every single day.

In other news, my girls continue to be nutso, in the good way. 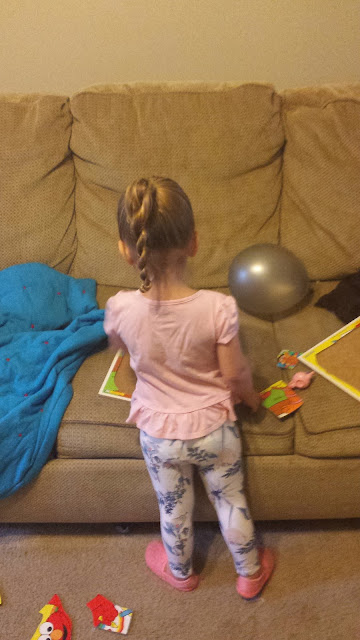 I did this twisty hairstyle on June one day last week and have never been able to emulate it since. I have made several attempts, but they have all been duds. I loved this first one though. 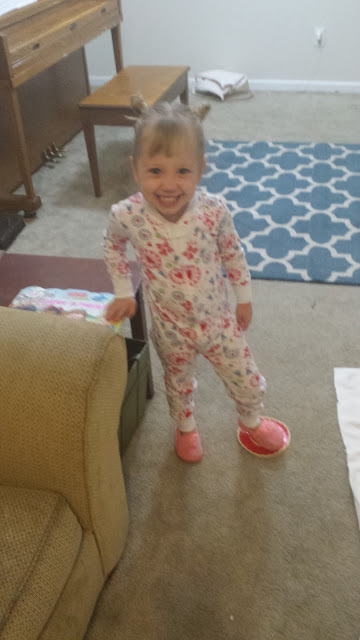 June had a pajama day at her school this week. She was very excited about her "pajama party", and I was so jealous that I managed to stay in my jammies a good part of the day as well. 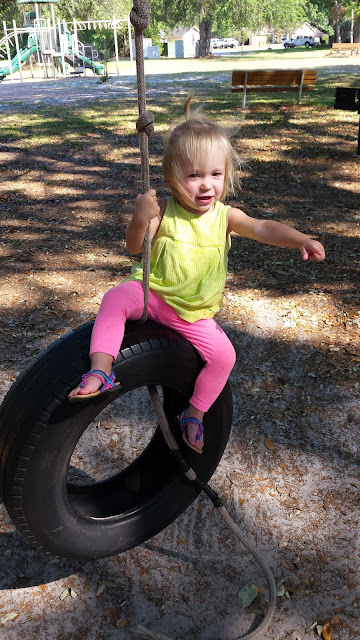 Gwen is SPUNKY. She's a definite daredevil and HATES being inside. And the average outside temp is 86 with tons of humidity. Ugh. We still manage to go to the park several times a week, usually first thing in the morning after taking June to school. She throws a fit every time we start to head back home. 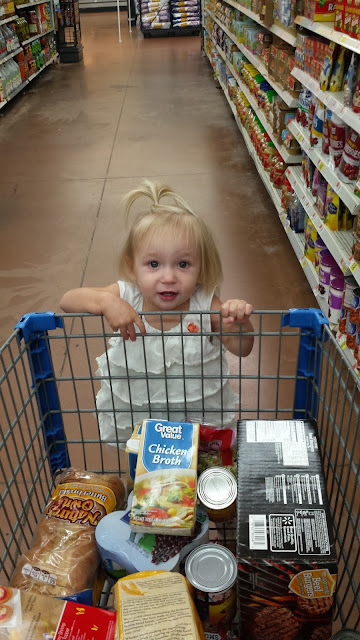 My sweet, easy shopping partner has been replaced by this maniac who won't sit in the cart. She tries to jump out every chance she gets, or she tries for the oh-so-comfortable arms around Mommy's neck while still standing in the cart and while Mom somehow blindly pushes the cart around the store. She has recently discovered that she can ride on the outside of the cart but gives no warning when she is done with this position. She'll just jump down at any moment, seconds away from being run over by a cart. It's an exhilarating experience, complete with many disapproving looks from strangers who apparently just moved here from a planet where kids don't exist. 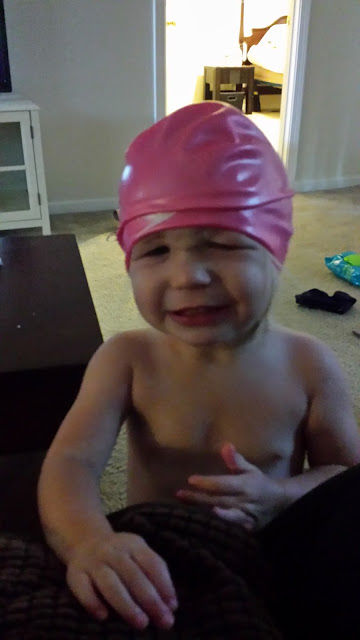 She also takes great pride in dressing herself. 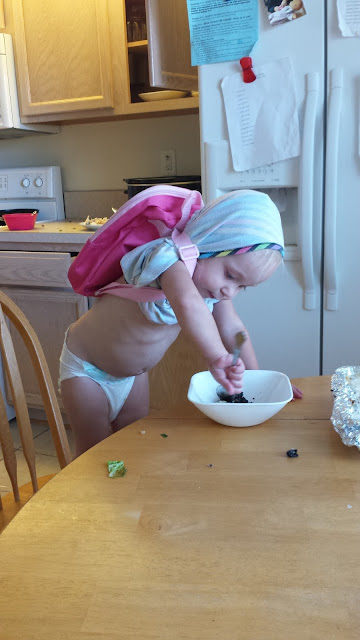 Dan has been spending a ton of time cleaning our crazy yard. We're in that awkward place where we don't want to be the junky neighbors on the street (though that's going to be a hard title for us to shake) but we also don't want to put a ton of money into our grass-less yard in a house that we don't own. We have raked about 40 bags of leaves so far, and Dan has done most of the work. 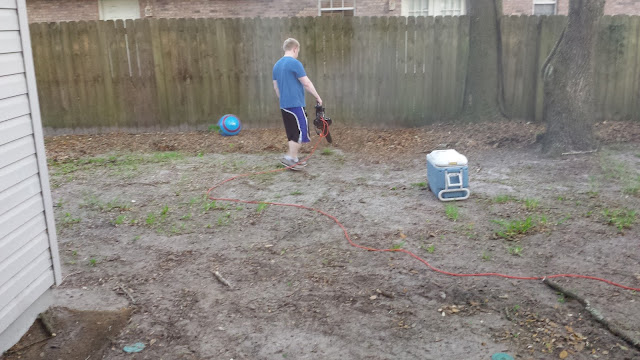 I'm really enjoying life in Jacksonville. I miss my Tampa peeps, and I really miss the warmer beach experience the gulf provides as opposed to the ocean. But my life here is calmer since I don't have to work so much. Plus, my husband is just the type of guy who likes making me happy. I don't know how this grouch won him over, but my Mother's Day was spent being pampered. I had so much yummy food and after church, I spent most of the day reading a book in bed. It. Was. Awesome.