I was scheduled to be induced Saturday morning, April 15th. It didn't sit well with me because it's Tax Day, and I felt like every year we attempted to celebrate Harris's birth, I would also be thinking about how much I owe the government. And then give Harris a really cheap and sad party where I was sitting in the corner trying to calculate how many purchases made for the party were tax deductible and wondering if I could claim any of his party attendants as a dependent. 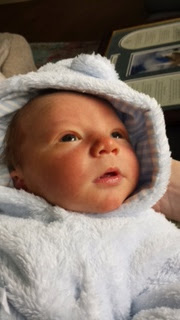 Well, apparently Harris also hated the idea of his party being hijacked by the IRS because he decided to make an early appearance. On Friday the 14th, I was lying on the bed in the late afternoon trying to get comfortable. Dan came home from work a little early that day and was setting up the trampoline in the backyard. All of a sudden, I felt horrible pain all through my body. "This must be a contraction," I thought. Even though this is my third kid, I've never experienced contractions before. Just a side note--contractions are horrible.

I yelled out to Dan through the window that I was in a lot of pain and that I needed him to time my contractions. I expected 10 minutes to go by. Nope. 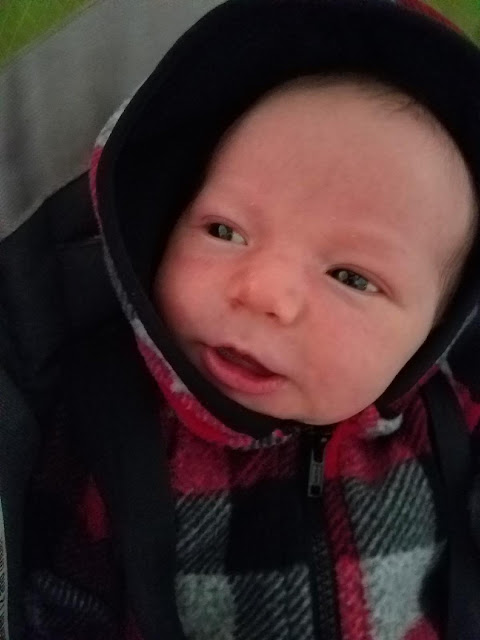 I felt so confused. This was like the movies, and everyone knows birth isn't really like the movies. Dan insisted I called my doctor, but I felt stupid doing so because I had only had 3 contractions and I know you're supposed to contract for an hour or so consistently before you call. But I called and then screamed into the phone. As you can imagine, this was not very helpful to anyone, but I couldn't speak.

Dan took the phone from me and just shouted, "HEATHER JOLLEY IS ON HER WAY TO THE HOSPITAL RIGHT NOW."

He called our babysitter who said she could be at our house in 15 minutes. We didn't have 15 minutes. So Dan told her to come and then knocked on our neighbor's house so that she could sit with the girls while the babysitter was driving over. 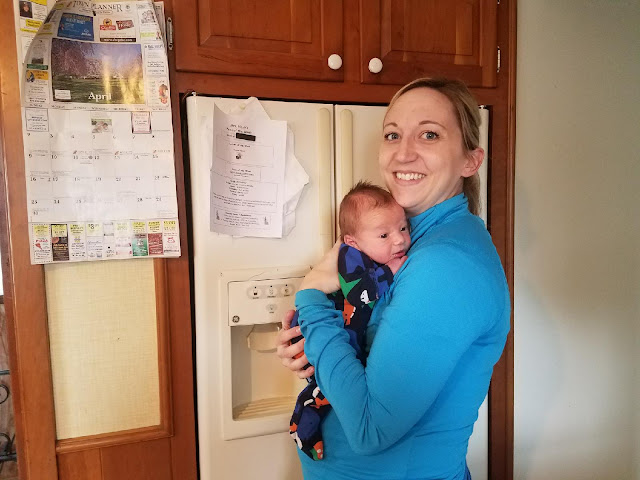 Our neighbor came over and found me screaming in the kitchen. I never said good-bye to the girls. I think they were watching tv the whole time and didn't even realize that we were leaving.

Dan helped me out to the car. I put on my seat belt and then quickly took it off again because it hurt really bad. By this point, the pain was so intense and I was hitting things. Like Dan's poor sun visor in his car that will probably never function the same. 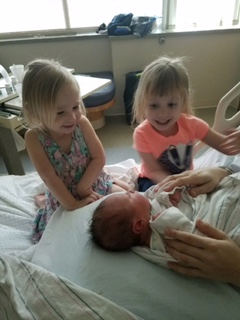 We drove up to the hospital (luckily only 11 minutes away), and Dan ran get to a wheelchair while I was in the car. But then I had the thought--what if I deliver in this car?!?!? So in between contractions (I only had about a 30 second break in between by this time), I waddled out of the car and attempted to walk into the hospital. And then I started screaming in the parking lot. And I saw some young girl heading to her car, and I yelled out to her, "WILL YOU TAKE ME TO LABOR AND DELIVERY?!?!?" She helped me into her car just as Dan was pulling up with the wheelchair, so I got in the wheelchair instead. 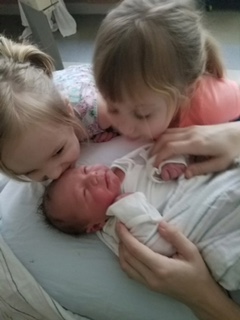 Dan ran as fast as he could, pushing my pregnant bod into the hospital. He almost passed out. 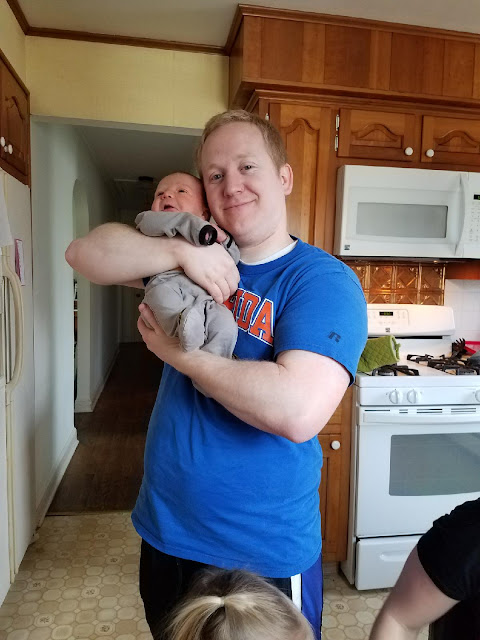 I was screaming the whole way into the hospital and they took me right into a room where a nurse checked me. 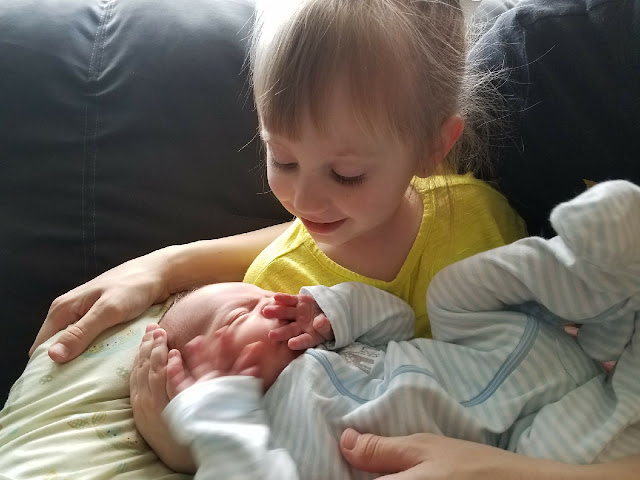 Everyone reassured me that drugs were on the way, but I knew they were lying. There was no way I could even sit still long enough for an epidural by this time.

I was a screaming witch banshee by this point. I hope I never see any of those people ever again. I kicked a nurse off of me who was trying to get the baby's heartbeat and in so doing was pressing down on my crotch in a most painful way. I realized my face was numb, and I called out, "I can't feel my face!!" And the nurse next to me told me it was because I was hyperventilating and that I needed to slow my breathing. "I CAN'T!" I screamed back at her.

About 3 minutes later, a resident OBGYN came in and told me to push if I felt like I needed to. I needed to. I dug my nails into another nurse's arm while I pushed, and everyone said, "You're doing great! Look there's his head!!" I didn't want to look. I wanted to die.

So I called out, "I WANT TO DIE!" And the nurse whose arm I was clawing to death said, "Oh honey, you're not going to die." And I said, "YOU AREN'T LISTENING. I WANT TO DIE."

Two more pushes, and Harris was OUT. Weighing in at NINE pounds, one ounce. Ouchhhhh. And they put him on my chest, and I have to admit that at that point I didn't want him anywhere near me. That baby tried to kill me!! I still had to deliver the placenta and get stitched up and I had this baby on my chest, and I called out, "I CAN'T BE A MOTHER RIGHT NOW."

I'm sure I'm one of those patients they talk about for years after.

Anyway, after the placenta came out, I felt ONE MILLION TIMES BETTER. I took a deep breath, smiled and said calmly to everyone, "I would just like to apologize for my behavior just now." And everyone laughed.

The whole thing was about 40 or 50 minutes from first contraction to delivery.

Then my mom came into town, and everything was great. We went for Frostys. (I just looked up the plural of Frosty, and it's quite a debate. Some people claim the plural is the same as the singular, some say it's Frostys. Some say Frosties. Some say Frosty's. What say ye?) 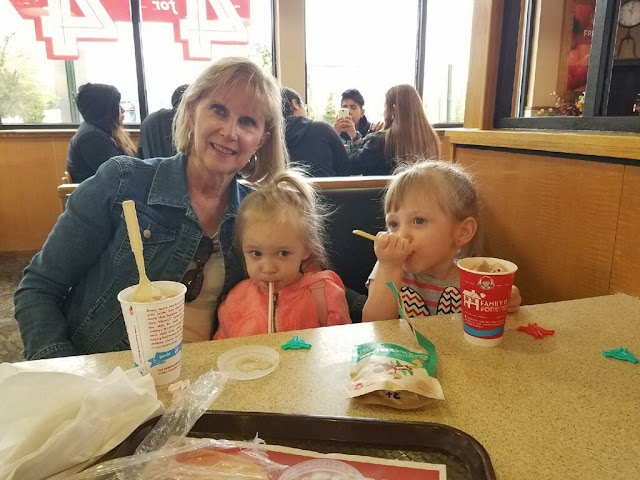 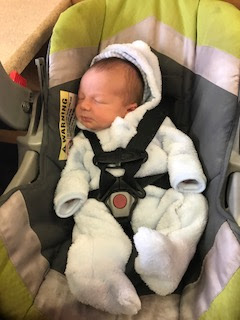 We took June to get her ears pierced and she hardly even cried. 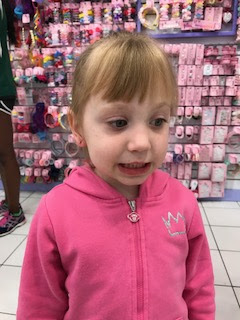 Our whole family missed Easter Sunday, so we observed one week later. The girls wore matching dresses, and I thought it was adorable (even though I said I would never do that). And we had an Easter egg hunt in the backyard. 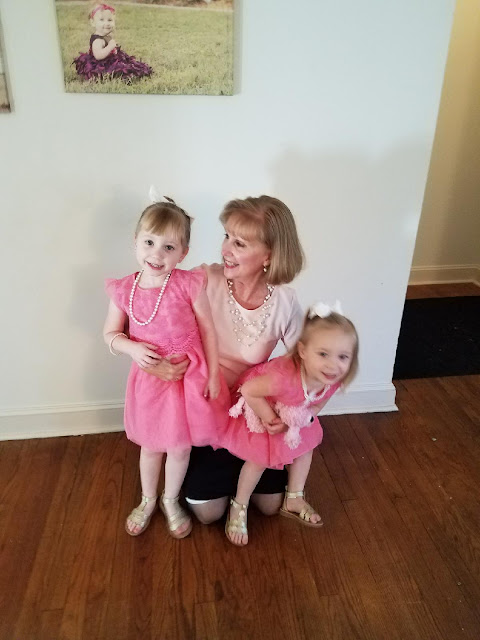 My mom is such a babe. She detests when I use that word to describe her, but really, there is no other word that fits. Babe. 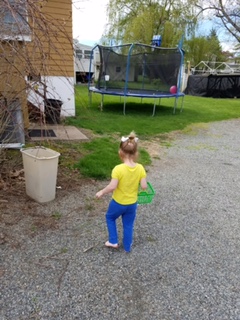 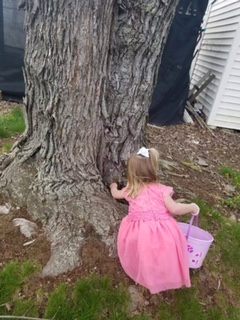 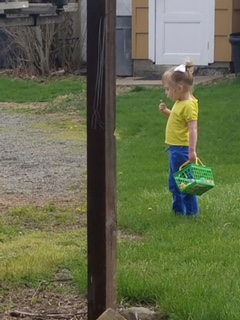 The girls didn't want to wear shoes and we have a gravel driveway, so the egg hunt was interesting.

And that's a wrap. I'm healing, and I'm tired. Harris gets up every 3 hours to eat. My hormones are all over the place. I laugh and I cry in the same sentence. Especially when people ask me if I would do natural childbirth again. Just do yourself a favor and don't ask.