What's Working and What's Not II

Nothing is as fun after my mom leaves, but we have been forging ahead with our new year's goals and also prepping for V Day.

Since studies have shown that most people have given up on their new year's resolutions 12 days after starting, I thought I would check in and give a candid evaluation on my performance thus far.

1. No Yelling. Yikes. I give myself a C+ on this one so far. I have definitely made huge strides in the no yelling department but have had some struggles the past couple of days. What have I learned? I can't just tell myself to not yell; instead, I have to keep myself below a certain level of stress. This means taking breaks, meditation, letting lots of things go. I'm a very stressed person by nature, so keeping my stress level low seems impossible sometimes. I am trying to not care about so many things. I say things to myself like "Be chill; it's just a spill!", which makes me wonder if I am slowly descending into a person who mutters to herself all day long while onlookers point and laugh. I'm simplifying on dinner plans, cleaning assignments, etc., and all the while I ask myself if I'm letting my standards slide too much.

I do feel like my house is a little happier, which is a huge win for me.

2. Preschool Gwen. B+ so far! We preschool most days, and while I'm not great at coming up with material, we have fun. We try for 30 minutes a day, and it's just the right amount.

June joined us one day when her school had a two-hour delay due to icy conditions. 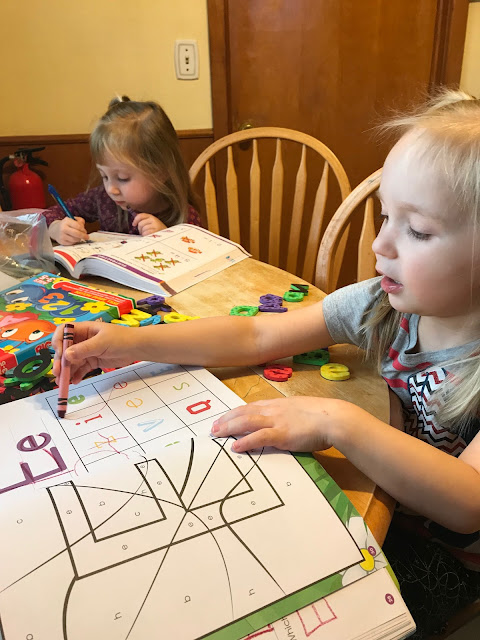 I made this mouth for an FHE lesson about not saying rude things to each other (Needs. To. Be. Repeated.) and also use it to talk about the sounds the letters make. 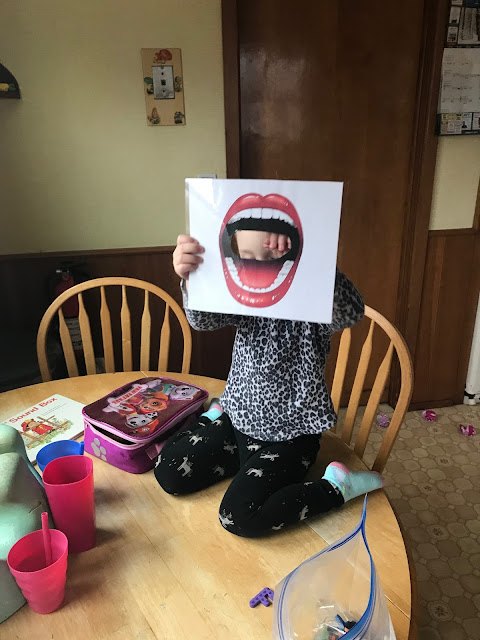 Gwen's favorite activity by far? Writing letters in a bowl of rice. 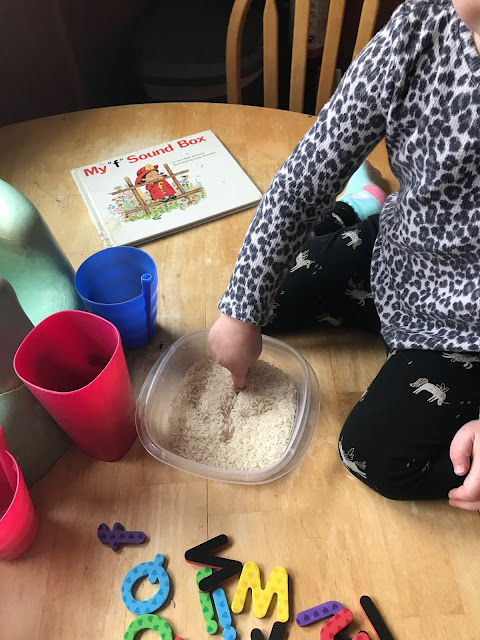 Also, those "sound box" books have been a surprise hit. I think they are so boring, but Gwen loves them.

3. No Zillow. I give myself a C here. I have been mostly good about it, but there were a few days where Dan wanted to have a discussion about house buying for very practical reasons (he wants to buy a house), and so we went on Zillow together. Unfortunately, I kept going back on for a few days before I got a hold of myself and have not looked again since (probably a week ago).

4. Pay Half Our Student Debt. This is going to be rough. D so far.

5. Read aloud. B+. I do not read an hour every night, but I do read for what feels like forever every night. Still a lot of picture books, but we did start our first "real" chapter book as well. June is thoroughly enjoying Charlotte's Web, while Gwen tolerates it most days. We have also started listening to Pippi Longstocking in the car, which is also a hit with June.

7. Podcasts. A+ and totally enjoying it.

8. Scriptures. B-. Doing well on the every day part, but the quality is lacking. Not always first thing in the morning either.

June's school had a carnival fundraiser last Saturday. Every family was asked to donate a cake for the cakewalk. June's school has extremely involved parents, which is a great thing but not a thing I'm very used to. For example, they had a giving tree for Christmas. I went to the school the third day of the giving tree to sign up to buy a present for a family in need. All of the presents had already been spoken for. I arrived at her kindergarten music program before they even opened the doors, and the line was around the school. And it was freezing outside. Dang involved parents!

So I expected the cakewalk to have really great cakes. I went to Wegmans and bought one of their beautiful coconut cakes and dropped it off at the school.

Dan went to set up for the carnival Friday night and told me when he came home that our cake stood out because it was the only nice cake. "Well, what the heck did everyone else bring?" I asked.

"Entenmann's", he responded. This, of course, was kind of a relief because I'm probably more of an Entenmann's person than a Wegmans person (not really because Entenmann's cakes are gross). But I am definitely an Aldi person. For sure a Dollar Tree person. Walmart is the name of my game. So it was a relief to discover that our "involved parent" school could also be an Entenmann's school. I find great comfort in that.

Anyway, upon seeing the selection of cakes and knowing we spent way more than was necessary, Dan decided we had to get our cake back. So we went to the carnival the next day, and Dan did the cakewalk as soon as it was open. He made the girls go with him so that we would have three spots covered. And luckily Gwen won. And then he made her pick out our coconut cake. Like the manipulative cheapsters we are. 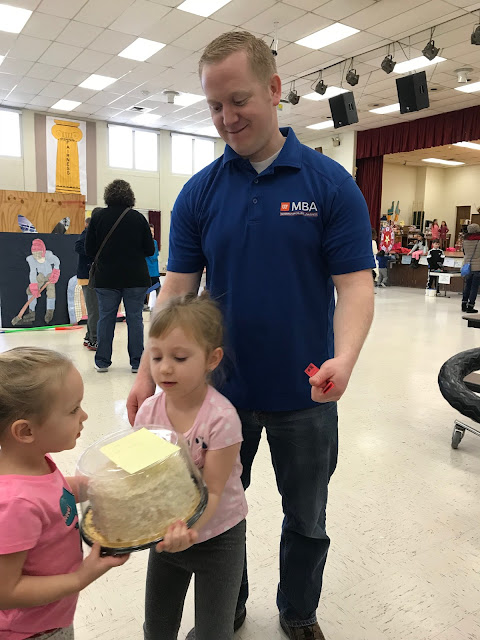 And then we went home and Dan had a slice of cake and said it wasn't even that great. Moral of the story--even when you win, sometimes you still lose.

Everyone had a great time at the carnival. June saw her crush there--the same boy she writes love notes to on the regular--and decided to keep up her mysterious and subtle flirtation game by screaming his name across the gym and then tackling him in a bear hug, almost to the floor. Discretion is her greatest strength.

Another way I have been simplifying is that we have the same FHE lesson two or three weeks in a row. I have toddlers, so I can get away with that. We have been trying to introduce the new prophet, Russell M. Nelson, to our girls. Unfortunately, I procrastinated talking to my girls very much about President Monson and they barely learned his name he passed away--as in, we actually had a lesson about him the week before he passed away.

So we've been talking about President Nelson and what a prophet is and then playing "Red Light Green Light" while the person calling things out holds the picture of the prophet. 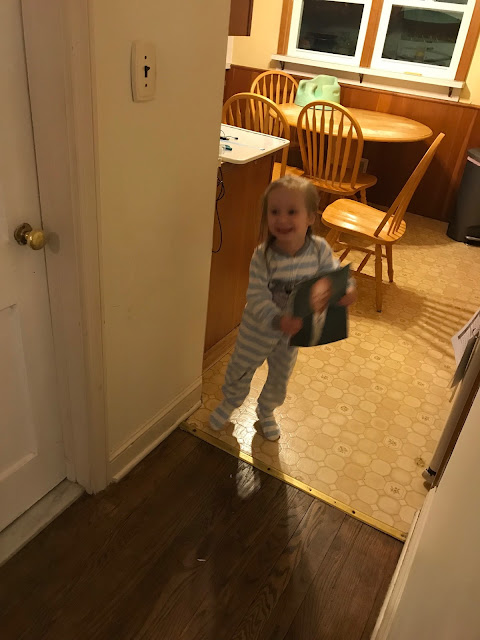 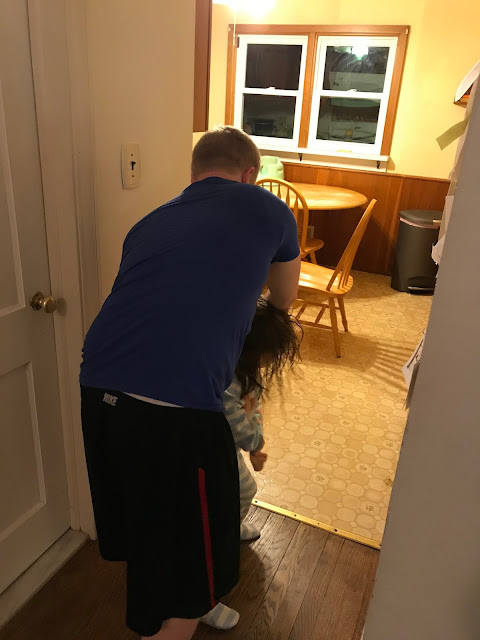 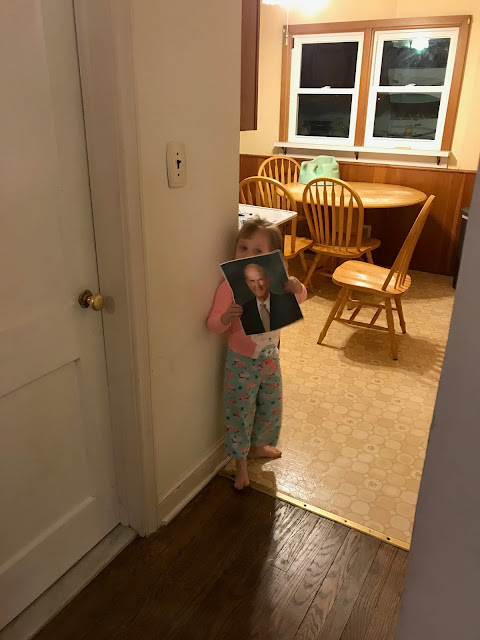 It's gone well, and I plan to keep repeating until they can tell me his name without prompting. If that takes 12 weeks, that's more than fine with me. 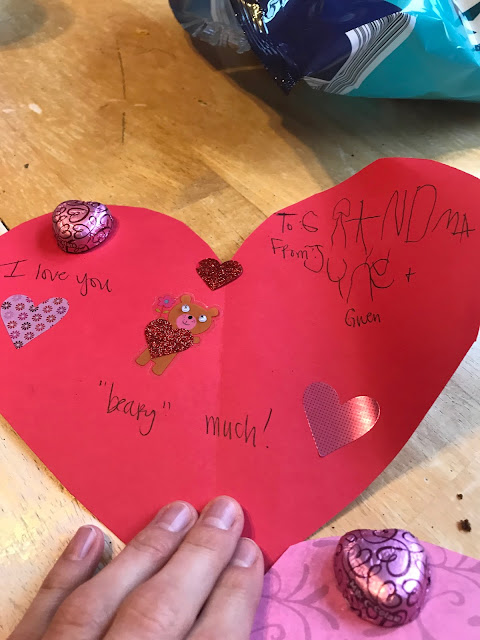 We've been making cards for friends and some extended family members, and I try to explain the concept of jokes to June. She loved the joke, "I love you beary much" but also thinks you can substitute any old animal in there and call it good. I have heard her tell people "I love you raccoon much! I love you kitty cat much!" and then burst into giggles at her own wit. 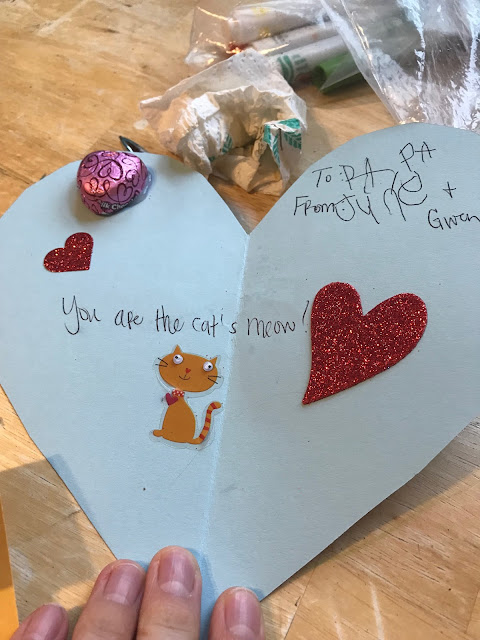 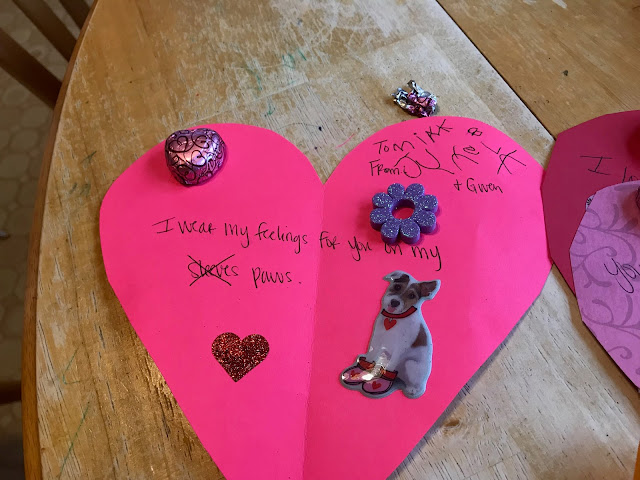 I don't have a pic of it but I also had one with a dinosaur that said "You are dino-mite!!" June has told many people, "I love you, dynamite!" 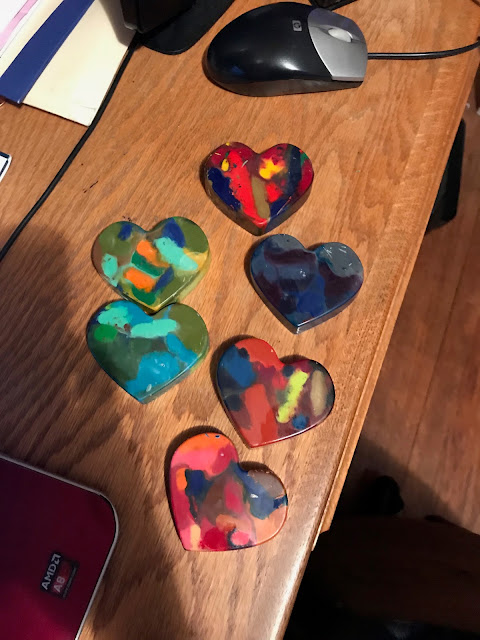 And we melted crayons into heart molds for the 6 boys in her class. I hope they like them because I almost lost a fingernail peeling paper off crayons before I realized we could soak them in water and then pull the paper right off. Just add it to the tally of my many lost battles in the war I'm raging against crafts.