They Say It's June's Birthday

I'm writing this from The Cave Formerly Known as My Bedroom, or TCFKAMB.

"How sick are you, Heather?" shouts the audience.

I'm so sick, that my best friend Lindsey came to visit me last week, and we had plans to go into the city, and instead we stayed home. I stayed in bed, and she and Dan watched the kids all weekend. What a bummer.

I have the flu. And as a prego, there's not much the doc can do for me. The doc I saw at the urgent care warned me it's probably going to drag on for three weeks. Three. Weeks.

My ward is amazing. People have been watching my kids and bringing in meals. For the flu! I know there are more major needs all around me, and I have been so touched as people have served me.

Dan woke up yesterday with something gross too PLUS pink eye, and he's flying to Spain for work today. We are a fun group.

But anyway, I don't think I have a single pic of Linz's trip here, because no one takes pictures of being sick in bed.

I do, however, have pics of the cute presents she brought for June, who turned SEVEN this week. 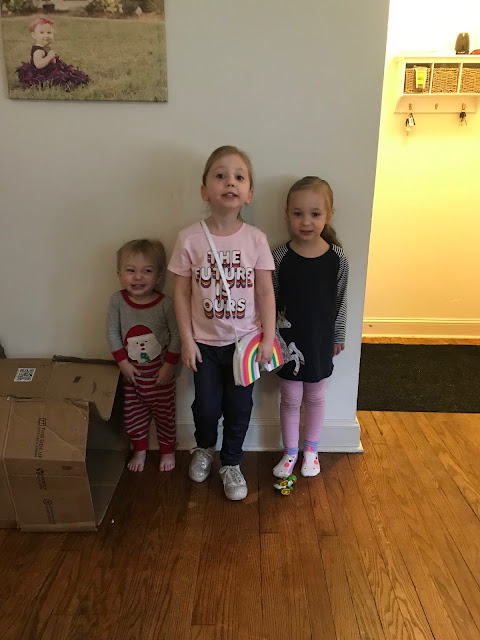 Linz had asked June what her favorite color was, and in true June fashion, she waxed poetic about "all of the colors of the rainbow", so Linz gave her rainbow-themed presents. The clothes are so cute, and the purse is a MEGA HIT. 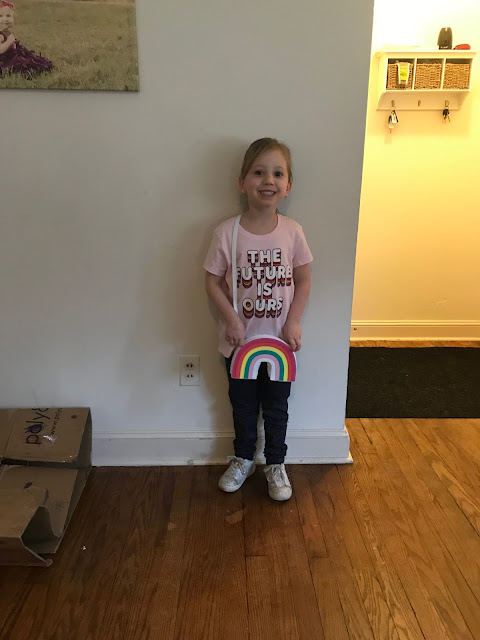 Of course, Gwen and Harris wanted their own photos too. 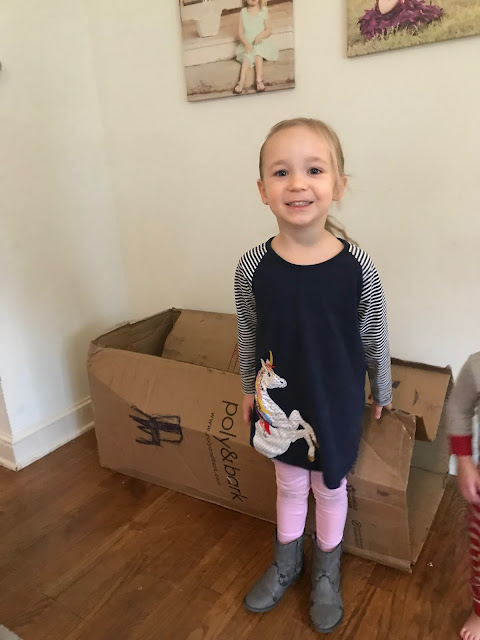 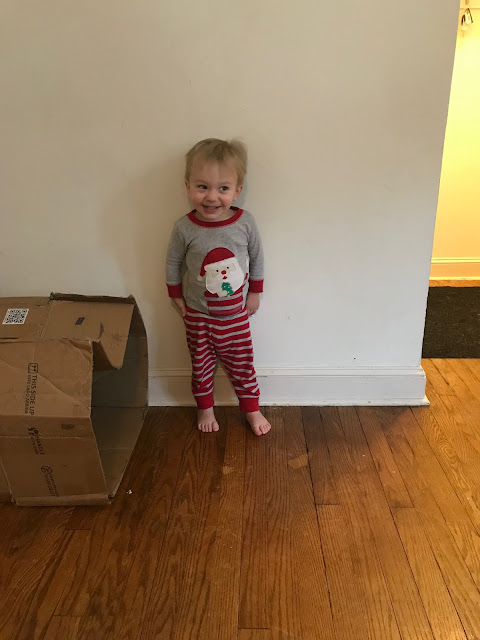 We had planned to do a joint birthday cake thing for June and Duncan on Sunday evening, but alas, I was too sick. So we did a quick 40 minute thing Monday night, before I keeled over and died. 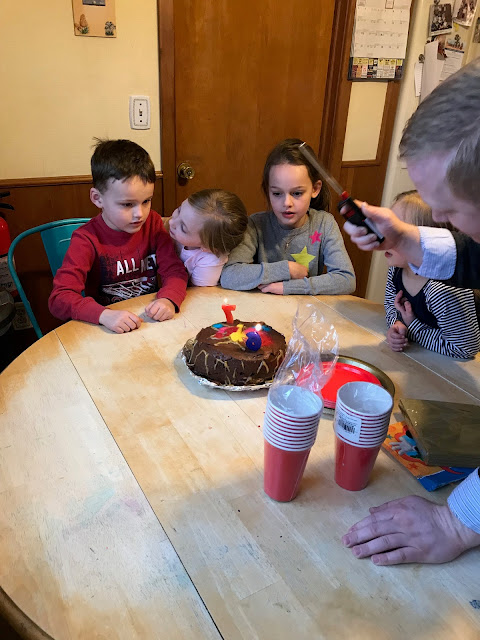 Though June is definitely in his personal space, Duncan cannot be distracted from the cake. 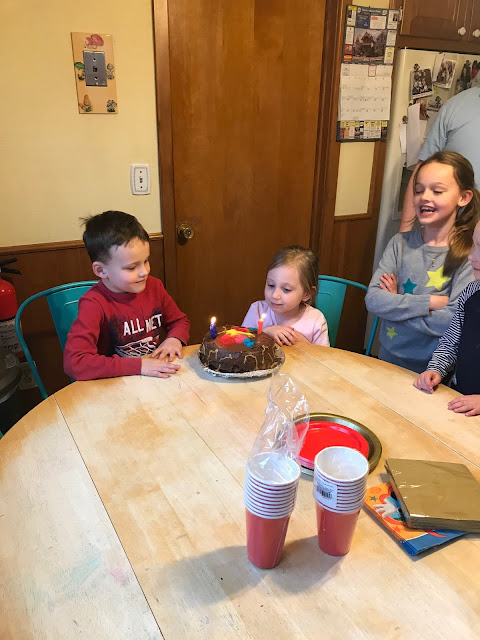 I made a new cake recipe this time. A doctored up cake mix and my sister's frosting recipe. It was a huge hit. 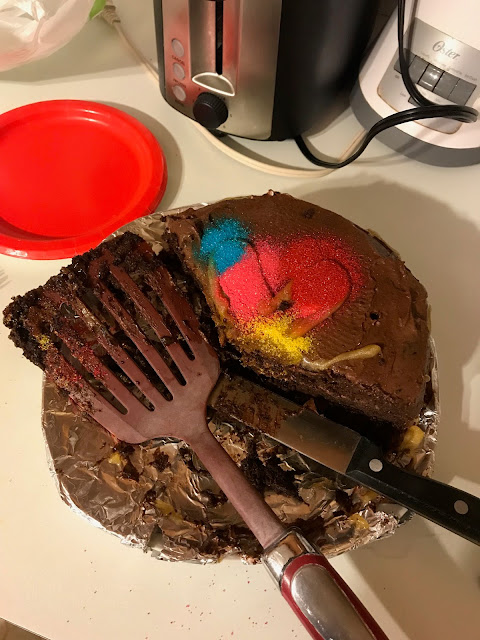 The cake had a butterfly on it for June, and then the kids hit a shark pinata because sharks are Duncan's favorite.

A goodbye hug with all of the Jolley/Wilkes kids because as I type this very sentence, they are MOVING TO UTAH. WILL WE EVER RECOVER FROM THEIR ABSENCE? 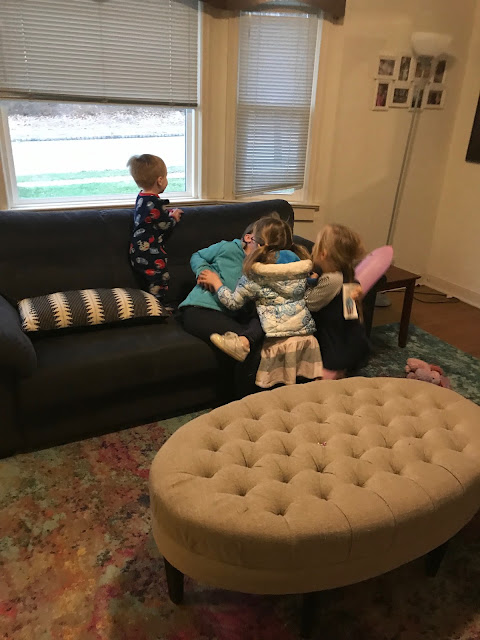 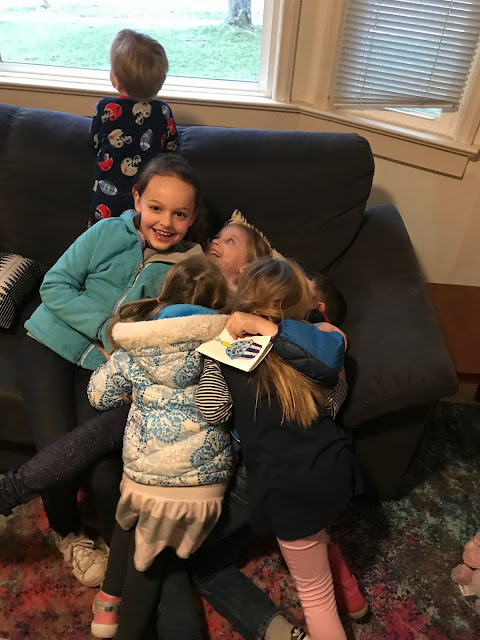 Even when Mom feels like garbage, the birthday show must go on. The next morning, I woke up and made June her name in pancakes. 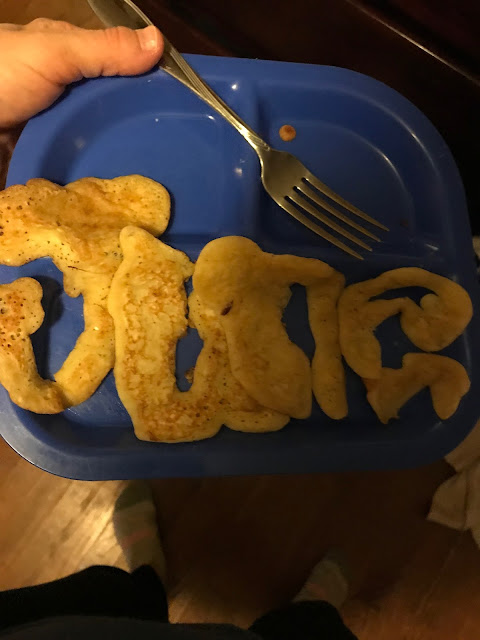 I tried to hurry and make them before she woke up, but I didn't, and she kept calling from her room, "I'M READY FOR MY NAME PANCAKES!!" 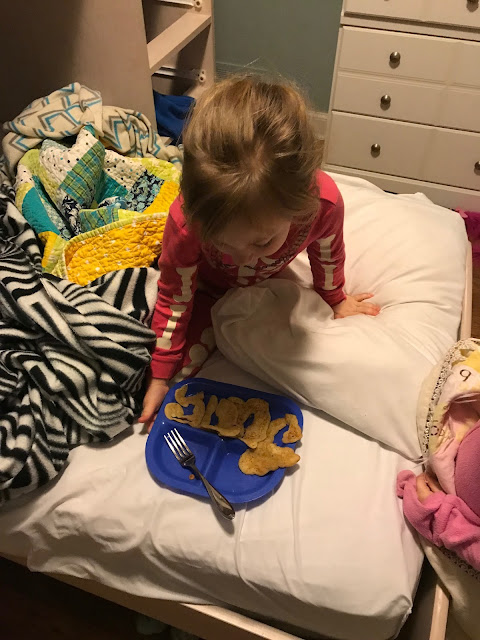 And also the candy bar poster. 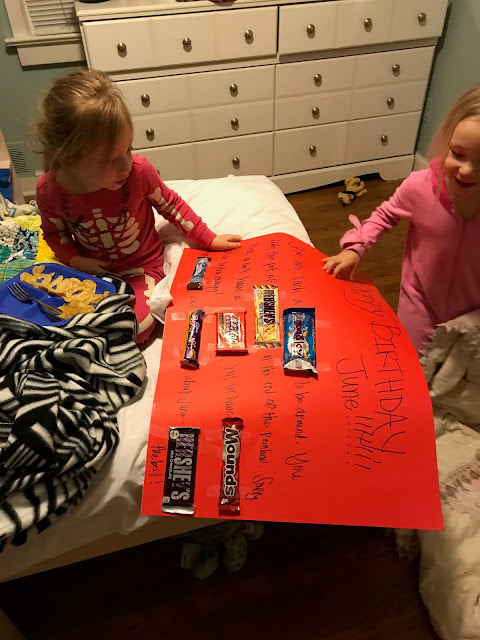 And she opened presents. 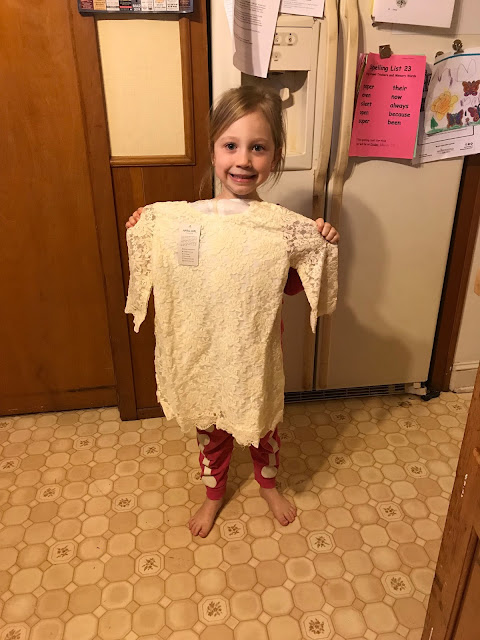 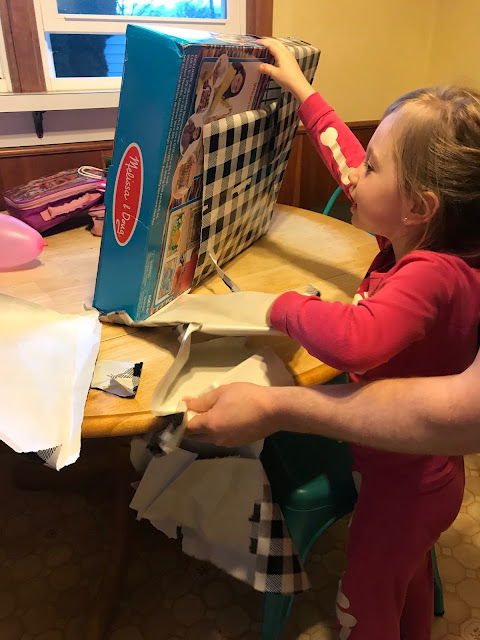 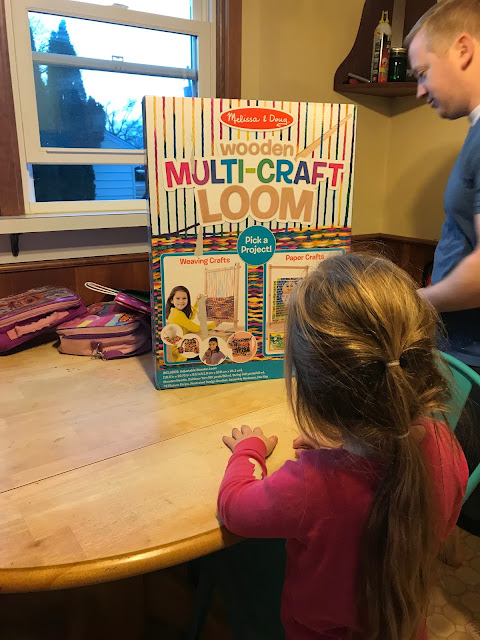 Not pictured: the many presents Grandma Sandy sent. I took a video of her opening those and didn't think to take pictures too. Darn it. She received many cute clothes, books and art supplies. 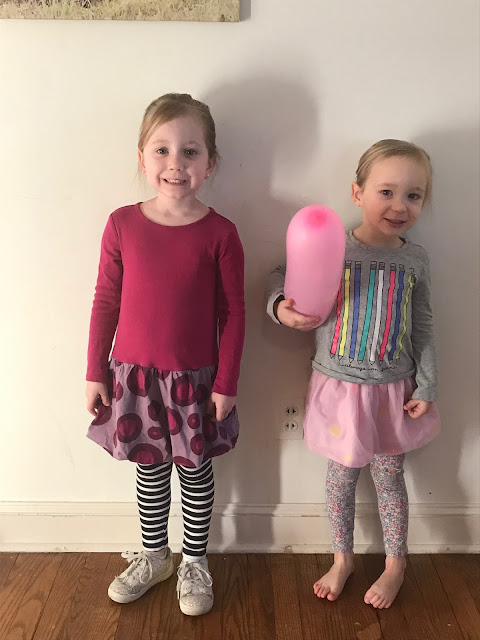 I can pull out a french braid about once a year, and here it is. 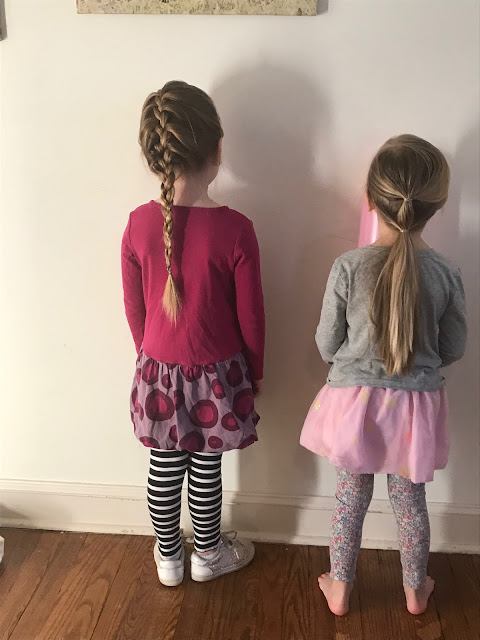 The pants Gwen is wearing in this photo mysteriously disappeared after she took them off that day. Because I threw them away. Because they are the rattiest pants in the whole world. So ratty a rat wouldn't wear them.

We've been working on the loom ever since! 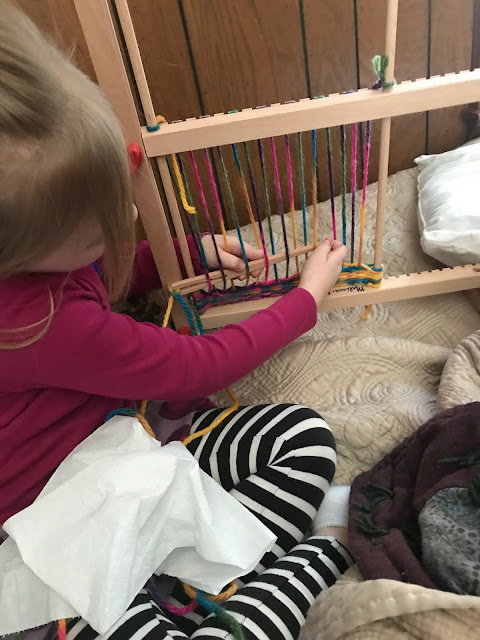 It was at about this moment that June said to me: "I'm proud of you for buying me this loom, Mom. It's a good present."

I often think about the things I really want to write about. I have really deep opinions. I'm practically a philosopher. Call me Dr. J.

But as it turns out, I just keep scraping by with the blogging, barely turning out catch-all posts that have no order, nuance, or theme.

Move over, James Joyce. Stream of consciousness is the name of MY game. 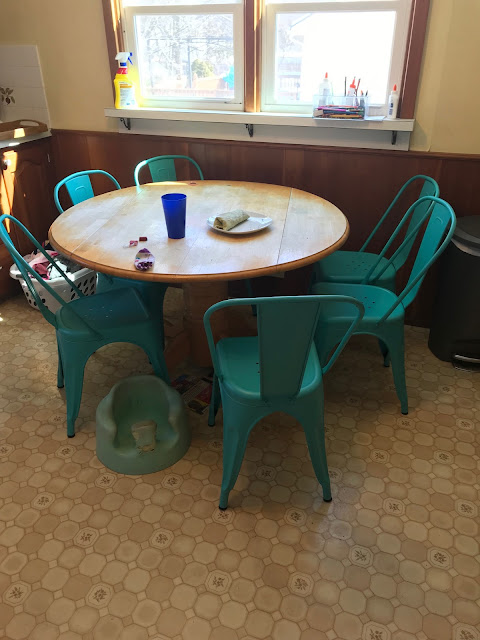 That's right, chairs. You may be rolling your eyes, but this was an exciting purchase for us. We had four chairs that went with this table when we bought it used from someone a few years ago, and slowly each chair has broken beyond repair. Dan has re-nailed, re wood-glued, re-done everything possible to fix the chairs, but sitting down in at least 3 of them became a game of Russian Butt Roulette. We had two that were totally broken and useless, one that was a designated "kid-only" chair, and then one that I could sometimes sit in if I tuned out the creaking and groaning from the seat underneath me anytime I took a deep breath.

So how would we sit for meals? Depends. We have an office chair in another room we would roll in sometimes. We have an old camping chair that we would bring in for special occasions. Dan became really accustomed to eating while leaning against a wall or a counter. He's a good sport. My growing pregnant belly relegated me to another room altogether because the living room couch proved much more comfortable.

Gwen would get sad every time I left. "Mom, I'll let you sit in the GOOD chair if you stay with us!!!"

I mean, that is so pathetic.

So why didn't we just buy new chairs? We had this ongoing debate forever because we know we are moving eventually and I want a completely new kitchen set. So I just kinda wanted to wait. Because our current kitchen is teeny tiny and only really fits a tiny table, and I want to buy a bigger set that fits a much larger space.

But then we received news that we are not moving for awhile. And my brother Steve and his family were coming for their spring break.

And all of a sudden, I felt the need to prove that we are real adults who sit on real chairs anytime we want!

Unless they read this.

Speaking of, Steve, Sarah, Josh and Whitney came for their Spring Break. They had a terrible time getting here because of a blizzard in Minneapolis, but they made it. There is nothing my kids love more than visitors (and new chairs!), so they were in heaven the whole time. Gwen cried every time Steve left the room. One day while Steve's crew was in the city, Gwen kept asking me where her best friend Uncle Steve was.

I didn't take a lot of pictures of our time together. We went into the city together Monday, and I came back early because my prego lady back and legs were done. They stayed through Tuesday. Akin to pioneer children, they walked and walked and walked and walked. So Wednesday, they were happy to hang around my house with me and sit on our fancy new chairs and chit chat. Which is my favorite thing.

We tried on each other's glasses. 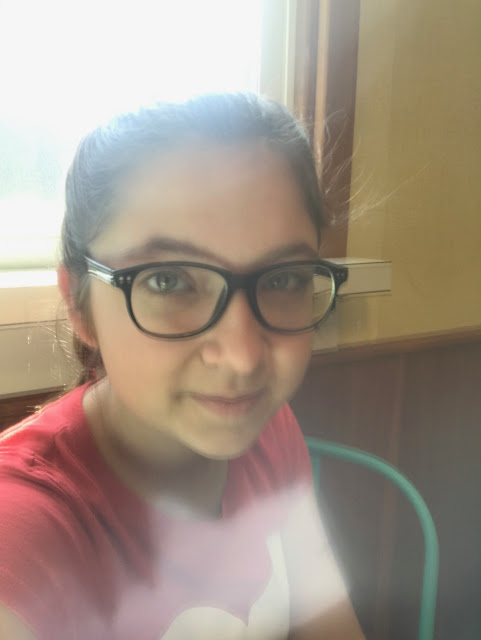 And me wearing Whitney's glasses. 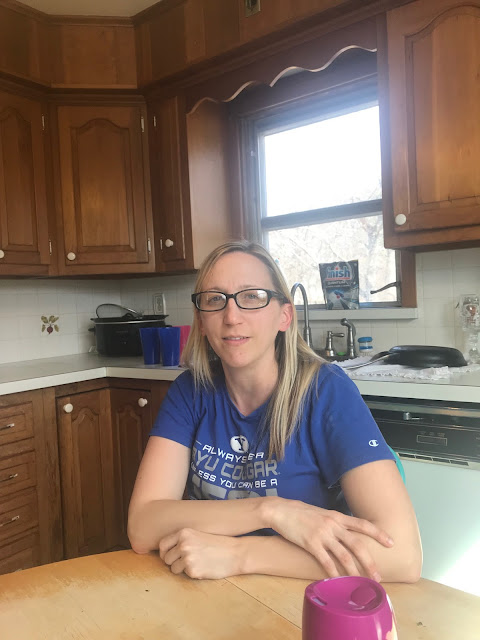 Those girls barely have a prescription. They tried on my glasses and could see into the future.

Whitney let me do her hair, and we got to talk all about seminary, her AP Human Geography class, and she practiced the piano for me because she has a competition coming up. It was so fun.

Dan and I are ward missionaries, and it is awesome. We have the best missionaries serving in our ward, and that is no lie.

Recently, they hosted an early morning Saturday scripture study to show the youth in our ward what mission life is like. I brought the breakfast! We worked on preparing a lesson for one of the people they are teaching. I'm such a nerd, but I thought it was so fun. 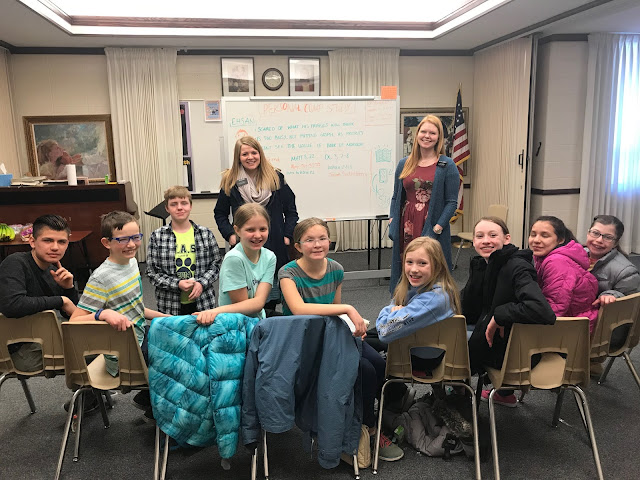 Later in the day, I found this picture on my phone. 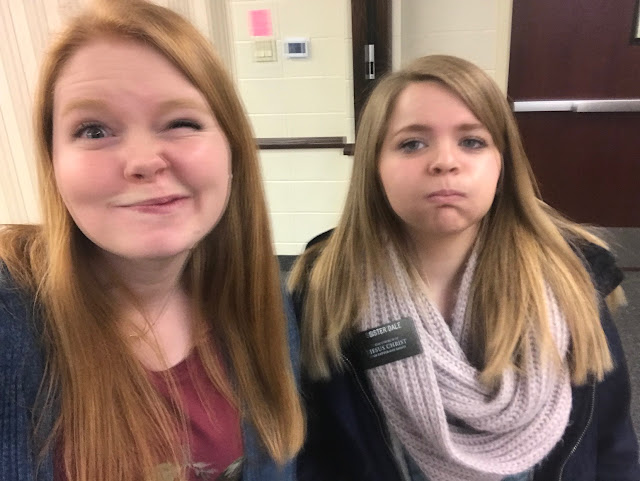 Dan and I celebrated our 9-year wedding anniversary by him going to Nashville for work and me hanging out with Steve's family. It was SOOO romantic. 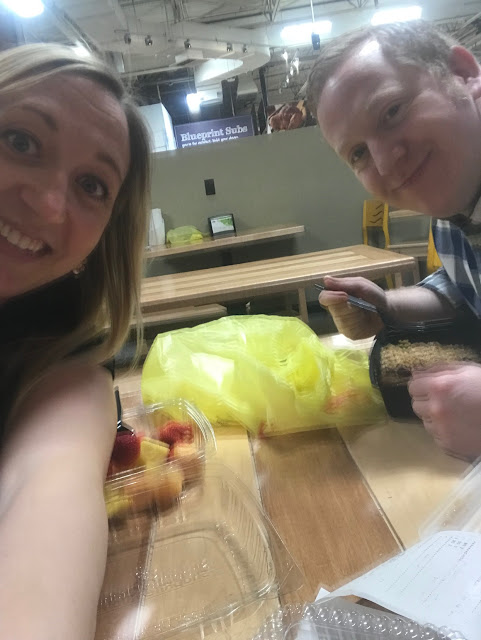 So when a dear friend offered to watch our kids one night so we could attend our church finance class together, we got dinner beforehand and made a real date out of it.

Real date being a relative term. We had about an hour to get dinner, and with places being so busy Friday nights, we were trying to think of something quick. Dan did some googling and found a food court type place he thought sounded good. So we looked and looked for it. Only to discover it was really the little deli food court inside of a Shoprite.

Whatever. It's fine. So we loaded up on our garden variety items and bought some cannolis from the bakery. It was actually perfect for our stage of life. Next year is the big TEN years, and Dan is already talking up big what we will do.

I'm terrible at St. Patrick's Day, which is a shame because it's a BIG deal here in New Jersey. Everyone is Irish, and everyone goes all out. I try and try but always fail.

This year, though, I at least made green pancakes. 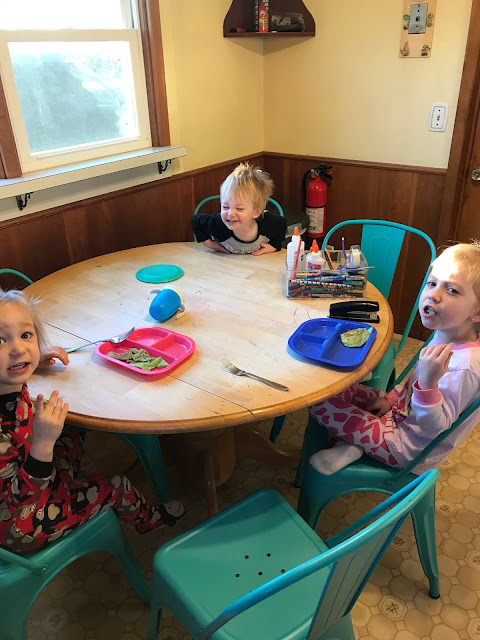 And tried to make our Saturday chore chart more festive. 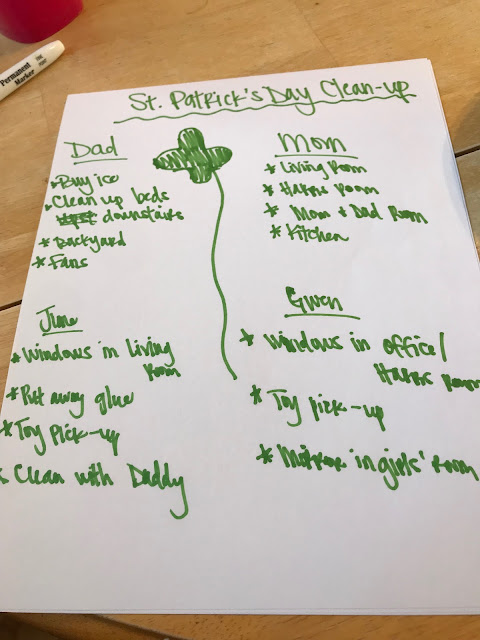 No one fell for that.

But everyone did wear something green to church Sunday. Which took some thought beforehand, so I am giving myself full points. 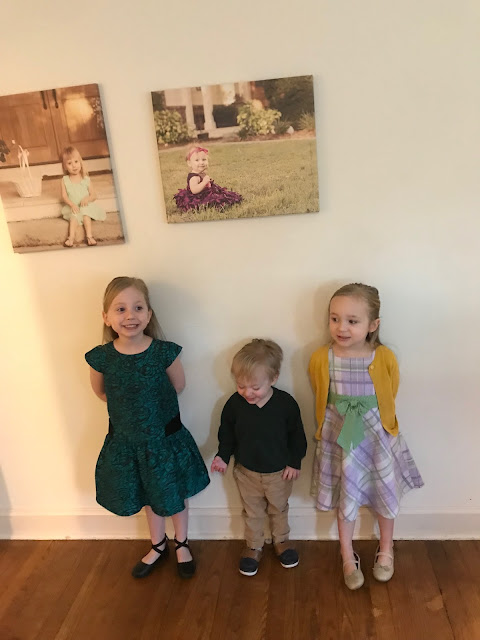 Not pictured: Me and Dan, both wearing green. Actually, I dressed up like a shamrock!

No I didn't. I wore a green pre-prego skirt that was just as comfortable as that sounds, and Dan wore his only green tie.

Dan told the kids years ago that green is his favorite color. And it is. But he actually doesn't care about green that much. But since then, anytime there is ANYTHING green, the girls go bonkers over it. "DAD'S FAVORITE COLOR! LET'S BUY THIS FOR DAD!" He often complains to me that the only thing his kids know about his is that he likes green. So all weekend, just to be annoying, I kept commenting to the girls how this was his favorite weekend of the year because he just loves green so much. He was thoroughly annoyed.

6. Harris gets a haircut. 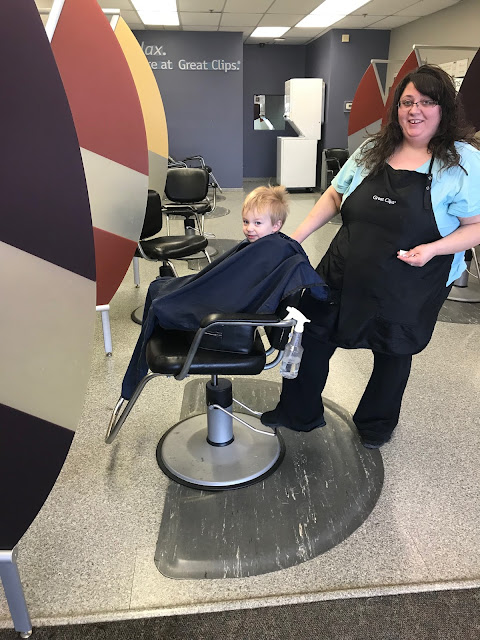 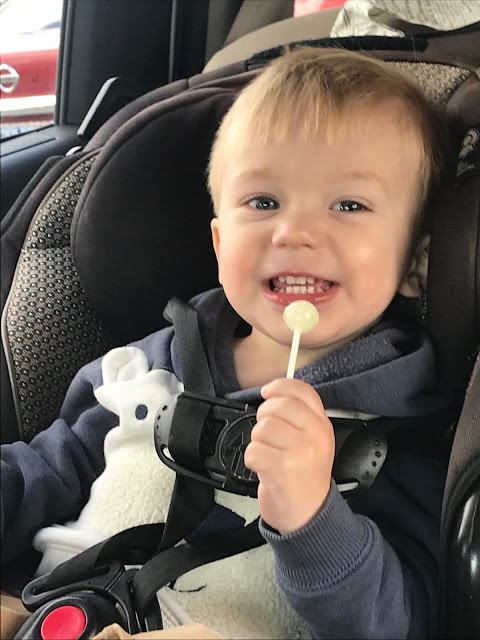 He's so cute and terrible and cute. All at the same time.